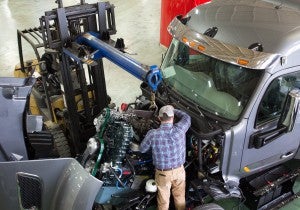 A Fitzgerald employee mates an older diesel engine to a new truck body.

Less than a year after Volkswagen was hit for more than $4 billion in fines, penalties and fees related to the German maker’s noncompliant diesel engines, the Environmental Protection Agency is set to exempt U.S.-built “gliders” that spew emissions 13 times worse than all of VW’s diesels combined.

According to the New York Times, EPA Administration Scott Pruitt is not only set to approve the vehicles, he’s contemplating removing the cap on how many of them can be sold annually. The Obama administration was attempting to cap their production at 300 units annually.

“Gliders” are trucks that use new truck bodies from Peterbilt, Freightliner and other manufacturers that are mated to rebuilt engines exempt from pollution standards. The resulting truck is cheaper, less expensive to maintain cheaper to repair and, in some instances, gets higher fuel economy than new trucks.

The “new” trucks were supposed to provide a way reuse a relatively new engine and other parts after an accident. However, they ultimately became loophole for evading modern emissions standards and other regulations.

(Diesel crisis may have just been what VW needed. Click Here to see who said it.)

The trucks emit dust and soot particles and toxins that are often blamed for asthma, lung cancer and other respiratory diseases. In 2015, there were 10,000 gliders sold in the U.S., which is up 10-fold from 2010. Further, the EPA’s own analysis revealed that found that gliders emitted nitrogen oxide levels during highway driving that were 43 times as high as those from trucks with modern emissions-control systems.

The trucks’ emissions filters were so clogged in stop-and-go traffic that the testing equipment shut down. The gliders were going to be subject to stricter emissions rules last month, but Pruitt, who as the attorney general of Oklahoma sued the EPA multiple times, exempted the gliders from the rule based on the results of a study by Tennessee Technological University.

(Click Here for details about the Justice Department’s settlement offer to FCA for diesel “scam.”)

The study essentially claimed the EPA test results were wrong. The study found that not only did the gliders not increase air pollution, but suggested they were cleaner than the newer diesels with more robust emissions controls. The study was paid for by Fitzgerald, a Tennessee company that produces gliders and supported by U.S. Rep. Diane Black, who is a Republican candidate for governor in the state.

The study is under internal investigation by the university after officials learned the company paid for the $225,000 study and helped with construction of a new building. While there are powerful allies supporting Pruitt’s move, there are plenty of detractors.

(Automakers spending over $20b annually as recalls and repair costs surge. Click Here for more.)

The loophole has been condemned in recently by a slew of truck makers, such as Volvo and Navistar, as well as UPS, the National Association of Manufacturers, the American Lung Association, the Consumer Federation of America, and unsurprisingly, by Fitzgerald competitors.