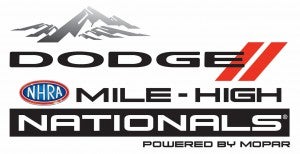 Dodge and Mopar continue to support NHRA racing with the sponsorship of the Mile High Nationals in Denver.

With the releases of the Hellcat and Demon models, it may seem like Dodge is looking to fill the world with street-legal drag racers. Well, now it’s working with the track-only monsters as it has signed on as title sponsor of the NHRA Mello Yello Drag Racing Series national event at Bandimere Speedway in Denver.

The brand has a long history with the NHRA, including its aftermarket performance brand, Mopar. The 2018 Dodge Mile-High NHRA Nationals Powered by Mopar marks the 30th year that FCA US LLC brands are race sponsors, one of the longest partnerships in all of motorsports.

“The sounds, smells and thrills of drag racing bring this attitude to life for the thousands of Dodge and Mopar fans who make the Mile-High NHRA Nationals a ‘must-see’ event.”

(Mopar gets its mitts on Ram 1500 for Chicago. Click Here for the story.)

That “must see” event is the 39th annual iteration of the race and runs July 20–22. The event kicks off the historic three-race “Western Swing” of the 2018 NHRA Mello Yello Drag Racing season that includes stops in California and Washington.

One of the longest-running NHRA national events, the Dodge Mile-High NHRA Nationals Powered by Mopar is a highly anticipated and a fan favorite in the series.

“We are excited to welcome Dodge on board as the title sponsor for the Mile-High Nationals,” said Brad Gerber, NHRA vice president and chief development officer. “Fans travel from all over the country to experience NHRA drag racing in Denver. It’s fitting that they make this race a part of the powerful Dodge brand.”

“We are proud to have Dodge taking on the lead role in the sponsorship of the Mile-High NHRA Nationals, while continuing with Mopar power as the presenting sponsor.”

Dodge and Mopar sponsorships aren’t limited to just this event. This year also marks the third consecutive year Dodge serves as the title sponsor of the Dodge NHRA Nationals in Reading, Pennsylvania, which runs Sept. 13–16.

The supercharged partnership of Dodge and Mopar in NHRA includes increased sponsorship of Leah Pritchett’s Top Fuel dragster, continuing support as primary sponsor of Matt Hagan’s Dodge Charger R/T Funny Car and a new 4,800-square-foot exhibit that combines the brands’ rigs to form one of the largest displays on the NHRA Manufacturers Midway.