Nissan Xmotion Concept “Signals Design Direction for 2020 and Beyond”

X-Trail reborn or something entirely new? 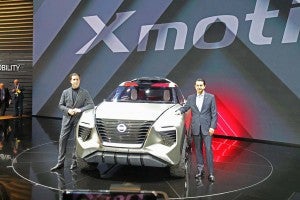 Nissan's Xmotion Concept is really more than just an idea, it's an early look at something coming around 2020.

Few foreign automakers have become more committed to crossovers than Nissan. It already boasts models ranging from the recently added Kicks up to the big Pathfinder and Murano models – never mind the more classic Armada SUV.

So what to make of the new Xmotion Concept making its debut today at the North American International Auto Show in Detroit. As one senior company insider put it to TheDetroitBureau.com as we started sniffing around, “We don’t do concepts just for the sake of building a concept anymore.” Translation: the Xmotion is clearly pointing towards a ute that will be joining the line-up sometime around 2020 or “beyond,” according to a Nissan statement.

As a three-row, six-passenger design, we can be pretty safe in assuming it won’t be the next-generation Juke. And while there have been rumors that Nissan might revive the classic truck-based X-Trail, we’re getting hints that the Xmotion Concept is intended as an update or replacement for something already in the line-up, and that would seem to suggest the Pathfinder, which migrated from a body-on-frame to car-based platform a few years back. And it would be due a major update around the end of the decade.

But Nissan is also signaling that the Xmotion is introducing a new design language that will be shared by the broader line-up, reflecting the vision of Alfonso Albaisa, the Cuban-born stylist who took over as the carmaker’s global design chief last year. 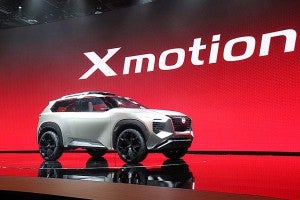 The Xmotion Concept is a study in how seemingly disparate elements can gain power and strength through coexistence.

(Nissan to demonstrate brain-to-vehicle technology at CES. Click Here for the story.)

With vehicles like the Juke and Murano, Nissan has tried to blaze a trail away from traditional two-box SUV/CUV designs, and that’s again the case with the new show car.

“The Xmotion Concept is a study in how seemingly disparate elements can gain power and strength through coexistence,” said Albaisa. “It draws inspiration from the Japanese aesthetics and techniques that have been passed down through generation after generation. At the same time, it achieves the modern purposefulness required for drivers in the near-future era of connected, autonomous crossover vehicles.”

There are, of course, some signature Nissan design elements immediately apparent in the Xmotion, including the ‘boomerang” headlamps and familiar V-motion grille which, here, is eve wider and deeper, adopting a more three-dimensional execution.

But Albaisa’s new vision shows up in details like the distinctive taillamp design which, Nissan suggests, “was inspired by the detail and warmth of ‘kumiko’ Japanese woodwork and puzzles.” The image may be of classic design but the maker reveals it’s actually an optical illusion created by the use of very modern holographic technology. 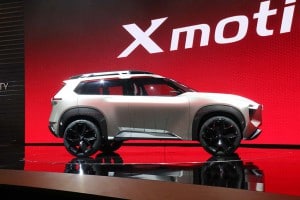 From the side, the Xmotion adopts a U-shape to its body panels.

From the side, the Xmotion adopts a U-shape to its body panels, which Albaisa explains “presented a big challenge in changing from one surface to another while keeping the shape.” Here, Nissan designers had to spend a lot of time using old-fashioned clay models to get the look just right.

Inside, the Xmotion Concept adopts a 4+2 layout, acknowledging that the back row would really best be suited to children or pets.

(Click Here to see more about Nissan hinting around about an Xterra revival.)

“We envision the vehicle to be a functional, everyday SUV that can be driven every day yet can take the owners and friends to a national park or recreation area on a whim,” said Albaisa.

With its side-by-side, three-row layout, the concept features a long center console bridging the interior, front-to-back. It also borrows from classic Japanese artistry, a technique for joining wood known as “kanawa tsugi.” By paying attention to the way the wood was structured – down to the direction of its grain – it was meant to appear as if the console was cut from a single piece of cedar. The same techniques were even used for the headrests.

But there are plenty of very modern touches to the Xmotion, including what Nissan calls a “floating commander,” which senses a passenger’s hand movements to control things like the infotainment and climate control systems.

Meanwhile, digital displays run the full width of the instrument panel, though they are divided up into seven different segments. Like the infotainment system, the displays also can be controlled by hand gestures and even eye movements.

Instead of using a key or fob, meanwhile, the Xmotion ramps up security by relying on fingerprint identification. And once “awakened,’ it signals it’s ready to go as a Japanese koi fish leaps onto the main screen. A personal voice assistant then comes to life.

“The vehicle has a beautifully unique graphic user interface, or GUI, that’s designed for the human in all of us – presenting a novel spatial world with digital precision,” said Albaisa. “It puts powerful technology at the users’ fingertips, including both the driver and passengers. It is designed to make your life easier and the journey and more exciting and enjoyable.”

As for the drivetrain, Nissan isn’t saying much beyond hinting that the concept is equipped with its Intelligent All-Wheel-Drive system. But the Japanese automaker has promised to accelerate its roll-out of electrified powertrain technology, which could mean that by the time a production version appears we very well could see it offered with a hybrid, plug-in or even a pure battery-electric option.

The concept also includes the latest take on Nissan’s semi-autonomous ProPilot technology. But with the automaker planning to introduce its fully self-driving system by 2022, a production Xmotion could feature that technology, as well.