System can anticipate what a driver is going to do. 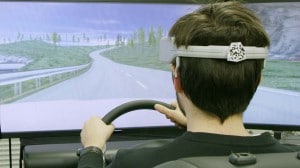 A volunteer uses the Nissan B2V technology to test how it works will driving on a simulator.

I think, therefore I drive? So, classical philosopher Rene Descartes might have opined after checking out the new Brain-to-Vehicle technology that Nissan Motor Co. will unveil at the Consumer Electronics Show next week.

Anyone who has driven a relatively recent-vintage vehicle has probably experienced the benefits – and occasional snags – of voice control. But Nissan’s system is designed to decode what a driver is thinking and use that to help control how a vehicle steers, accelerates or brakes. In an emergency, for example, it could allow a car to begin slowing down as much as a half-second before the driver’s foot actually hits the brake pedal.

Don’t expect to see the Brain-to-Vehicle, or B2V, technology show up as an option in the latest Nissan sedans and SUVs. It’s still a work in progress, and the second-largest Japanese automaker doesn’t expect it to be ready for production for at least five to 10 years. 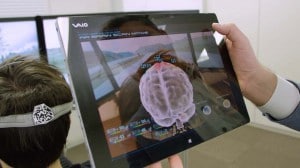 A computer screen monitors the parts of the brain that send signals during driving.

There are a number of challenges left to resolve before a car can accurately predict what you’re thinking – and know how to translate that into action. For one thing, the Nissan B2V system currently requires a driver to wear a wired cap so that it can place sensors close to the appropriate areas of the brain where key driving decisions are made.

And, if you’re driving to work and see a store that interests you, for example, the system would need to know whether you intend to stop there immediately or on the way home.

The use of brain-to-vehicle technology could add a new twist to the autonomous vehicle systems that most automakers are now developing. Nissan has said it plans to offer its first fully self-driving model by 2022, though it will begin phasing in new semi-autonomous technologies before then.

“When most people think about autonomous driving, they have a very impersonal vision of the future, where humans relinquish control to the machines,” said Nissan Executive Vice President Daniele Schillaci. “Yet B2V technology does the opposite, by using signals from their own brain to make the drive even more exciting and enjoyable.”

The new technology is designed monitor what a driver is thinking and feeling. It can detect stress or discomfort, for example, and adjust the way the vehicle is operating, whether it is in manual or autonomous mode, according to Nissan. 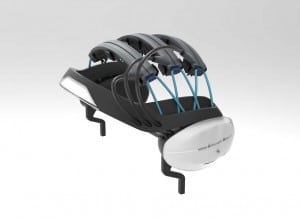 For now, at least, a driver would have to wear a wired cap that closely monitors brain activity.

It also can predict when a motorist is about to take an action, such as steering, braking or accelerating, and initiate that action anywhere from 0.2 to 0.5 seconds sooner than the motorist would otherwise turn the steering wheel or depress one of the vehicle’s pedals. That can make a major difference in an emergency considering a vehicle moving at 60 mph travels 88 feet per second.

Nissan will demonstrate the new technology using its IMx concept vehicle to simulate driving. It will serve as the centerpiece of the automaker’s display at next week’s CES. The show, which historically focused on TVs, smartphones and other electronic gadgets, has more recently become a showcase for the latest in advanced automotive technology, as well. Chevrolet, for example, introduced its long-range Bolt EV electric car at the Las Vegas event last year.

(Mercedes will demo new “user experience” at CES. Click Here for a preview.)