Byton is the latest EV company looking to hit the market. 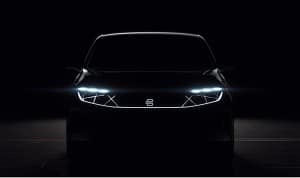 Byron isn't revealing much about the exterior of its new EV coming to CES 2018.

China’s push for more new energy vehicles, or NEVs, has EV makers working overtime to meet the demands of the government. It’s not just the established companies making moves either. Byton, a China-based startup, is announcing its presence with authority with its first-ever vehicle at the upcoming Consumer Electronics Show.

The company plans to debut its “all-new electric vehicle” at CES 2018 with production in China in 2019 and sales moving to U.S. and European shores in 2020.

The company isn’t releasing many details about wha the exterior of the vehicle looks like, although from the teaser photo, the front grille features LED lighting to illuminate the grille as well as the logo on the hood of the vehicle. It also features six LED head lamps, three on each side.

On the interior, the entire dash is a touch screen from door to door, allowing the driver to configure it as he or she sees fit. Additionally, voice recognition and gesture controls will allow the driver to utilize the various functions in the vehicle.

The dashboard and center console of the new Byton EV can be configured to the needs of the driver.

A cloud platform allows the car to automatically sync with a driver or passenger’s devices and related apps, ensuring everything on their phones is also accessible through the infotainment system. The doors can be unlocked using facial recognition software.

The vehicle will be produced at a factory in Nanjing, according to the company. Additionally, the company has offices in five other locations around the world, including Santa Clara, California. The company’s only U.S. office focuses on research and development, particularly for autonomous vehicles

Before the company sounds too “pie in the sky,” the CEO is has some experience with EV’s before. Carsten Breitfeld is the Chairman, Co-Founder and CEO and before joining the Chinese firm, he headed up BMW’s i8 program.

(Click Here to see more about the Apple car.)

Breitfield is saying all the right things for now, but if the recent spate of Chinese vehicle makers entering the market in China and the U.S. has taught observers: believe it when you see it. The tech heavy nature of the vehicle means it will be appealing to that crowd, but it will also be more prone to bugs and bottlenecks, a la Tesla’s Model 3.

That said, it apparently believes it’s ready to take on the challenge.

“As a start-up company, we create an environment for free thinking and action. We believe in our confidence and enthusiasm to tackle all challenges with the spirit of an achiever,” the company said.