Lottery Winner? Here’s a Few Options for That Cash

Bring a big checkbook and be prepared for speed, speed and more speed. 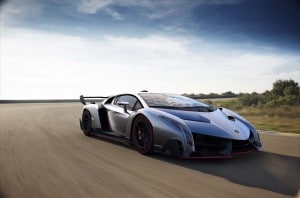 With some lottery winnings, this could be an early purchase on a spending spree of millions of dollars.

With lottery winnings possibility encroaching upon a $1 billion, players often wonder aloud what they might spend their winnings on, if they should manage to pick the correct six numbers.

Fortunately, there are plenty of options in the automotive world. Though a completely tricked out Ford Mustang or Bentley Bentayga – more likely, the new Volvo V90 in the case of one ticket-holding automotive scribe – might top the list, there are even bigger items.

If one holds a ticket worth nearly half a million dollars, adding an additional set of zeroes before the decimal point is certainly within a winners newly expanded budget.

So, if you’re looking to spend upwards of $1 million, the top 10 most expensive vehicles is the list your looking for and fortunately, we’ve found it … with the help of Forbes.com. So if you win, you can go straight to the top of the list: the Lamborghini Veneno Roadster at $4.5 million.

Featuring all of those hard angles we remember from Lambos past, this street-legal racer features a 6.5-liter V12 engine that puts out 740 horsepower. Named after a famed fighting bull, the Italian sports car maker is producing just nine of them so it may take more than the $4.5 million “sticker” price to get one.

The next best option is the Aston Martin Valkyrie at $3.2 million. A road-ready track model developed with Red Bull Racing, this beast seats you like a Formula One driver and surrounds you with lightweight carbon fiber structure powered by a mid-engine V12. There are no stats on how fast from zero to 60 mph or a top speed, but just know It. Goes. Fast. Aston is only producing between 99 and 150 units in 2018.

If all else fails, perhaps getting a Bugatti Chiron is the answer. The replacement for the outgoing Veyron, also known as the fastest car in the world at one time, the Chiron will be in the running for that title as well. Boasting an 8.0-liter W16 – or two V8s – putting out about 1,500 horsepower, it’ll sprint from zero to 60 mph in 2.4 seconds with a top speed of more than 250 mph.

(Click Here to check out the Hennessey Venom F5.)

Ok. So now you’ve found a new car, you’ll need a place to run it. Don’t worry, you need a home racetrack and I’ve gotta guy.