Like “molten metal being forged into a fine Japanese sword.” 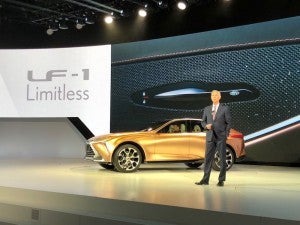 Lexus is looking to get a foothold in the larger crossover segment. The LF-1 Limitless may do it, Lexus GM Jeff Bracken said.

Its been just a year since Lexus brought an all-new version of its big LS sedan to the North American International Auto Show, but what a year it has been. Time was when full-size sedans like the LS helped put a halo atop a luxury brand. But 2017 saw a dramatic shift in the U.S. market, traditional passenger cars all but dropping off the sales charts as millions of American motorists opted for sport and crossover-utility vehicles.

Hoping to catch up on that trend, the Japanese luxury brand is back in Detroit this week with what is expected to become its new flagship, a prototype it has dubbed the Lexus LF-1 Limitless Concept. It features an edgy design intended to strike a balance between a crossover and a more classic sports sedan. And a production version is quite likely to roll into Lexus showrooms in the relatively near future.

Lexus General Manager Jeff Bracken told the auto show crowd the concept could “become a member of the family.” However, he was a little more circumspect in a post event interview with TheDetroitBureau.com.

“We clearly have a gap at the high end of the market,” above the RX midsize luxury ute that is the segment’s best-seller, he said, adding, “This is a gap we have to fill.”

The final product could be the CUV counter to the Lexus LS flagship sedan, Bracken describing that as “a great analogy.”

The idea of a crossover flagship is what the designers had in mind when working up the new concept.

“This is our vision for a new kind of flagship vehicle that embraces crossover capability without giving up the performance and luxury delivered by today’s top sedans,” said Kevin Hunter, the president of CALTY,  Lexus parent Toyota advanced design center near Los Angeles. “The LF-1 Limitless concept incorporates imaginative technology while creating a strong emotional connection by improving the human experience for the driver and passengers.

Lexus is no newcomer to the crossover segment. It overwhelmingly dominates the midsize segment with its familiar RX, But it has been slow to flesh out its line-up, only recently reaching down-market with the smaller NX. At the high end, there is the massive LX, but that body-on-frame behemoth really doesn’t play to where the market has been going. Lexus desperately needs a more modern, car-like model at the top to take on what competitors like Audi and BMW are bringing to market. 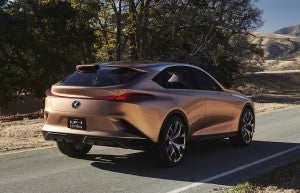 The Lexus LF-1 Limitless concept provides a glimpse at what could be the brand's future large crossover.

(Lexus taking wraps off new crossover in Detroit. Click Here for the story.)

Like the smaller NX crossover – as well as the new LC sports coupe – Lexus has opted for the extremes when it comes to the design of the Limitless Concept. It takes to heart the mantra of parent Toyota Motor Corp.’s CEO Akio Toyoda, who has commanded more “passion” be put into the brand.

The LF-1’s potentially polarizing shape, suggests Lexus, can be likened to “molten metal being forged into a fine Japanese sword.”

It is lower and more sports car-like than the typical premium CUV, long and wide and intended to appear in motion even when standing still. It’s 22-inch low-profile wheels and tires are “barely contained under bulging fenders,” the maker gushes in a press release, giving the LF-1 an athletic profile.

The face, of course, features the now-familiar Lexus spindle grille, though it adapts a more three-dimensional appearance. One of the more distinctive details comes with the use of LED lighting, rather than chrome, to frame the grille. 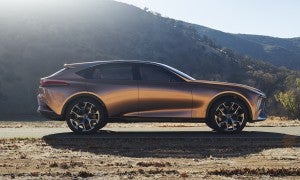 The Limitless Concept adheres to the aggressive styling mandate put forth by Toyota CEO Akio Toyoda.

There are the requisite air curtains for the front wheels and a split spoiler in back. Lexus also boasts about the concept’s “curves and details along every inch of the rear fascia.” That’s the sort of overly wrought detail that has generated much controversy about the brand’s latest styling direction, though Lexus designers have tended to tone things down when their concepts are put into production.

(Click Here to see why Lexus keeps an eye toward the future with LS+Concept.)

Inside, the Lexus LF-1 marries traditional luxury features, such as two-tone Cocoa Bean and Chiffon White leather, with more modern technology, including indirect LED lighting that can be adjusted to the driver’s color preference. There’s also what Lexus calls a “four-dimensional” navigation system that is meant to “anticipate the needs of the driver and occupants,” according to Lexus. It not only adjusts for traffic and road conditions, but also suggests fuel stops, rest breaks and can make hotel reservations during a longer trip. 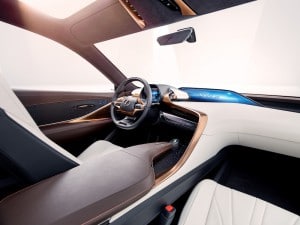 The Limitless interior provides an edgy, yet elegant interior the large crossover concept.

On the whole, Lexus appears to be taking what it has delivered with the latest LS sedan and translating it into crossover trim, adding a few more high-tech touches reflecting the fact that in the smartphone era you can’t go a full year without upgrades.

So, no surprise, the LF-1 features parent Toyota’s “Chauffeur” autonomous driving system that would allow a motorist to switch to hands-free mode or back to manual for a more sporty experience using the steering wheel-mounted transmission paddle shifters.

What sort of gearbox might they control? Well, Lexus seems to be ready to offer future LF-1 buyers all manner of options, hinting the production version will ultimately be powered by not only a conventional gas engine, but by hybrid, plug-in, all-electric or even fuel-cell powertrains. That’s also in keeping with a mandate from CEO Toyoda who has promised to deliver electrified options for every single Toyota and Lexus model in the years ahead.

A few years back we might have questioned whether Lexus would actually build the LF-1, but the luxury brand appears to have abandoned the age-old practice of rolling out fantasies in chrome never intended to see an assembly line. Even the exotic LC made the jump from exotic show car to production.

And while Lexus leaves us guessing, declaring the Limitless model “represents the potential for an amazing experience for future luxury customers,” insiders tell TheDetroitBureau.com that we’ll be seeing an only slightly toned down version cap the Lexus line-up in the not-too-distant future.