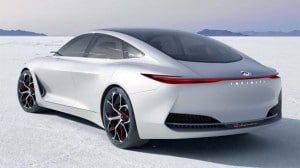 Infiniti provides a rear view of the Q Inspiration Concept coming to the NAIAS this month.

Infiniti has a long history of teasing us with exotic concepts that eventually translate into slightly more sedate production vehicles. So, what to make of the inspiring new fastback prototype it plans to bring to the North American International Auto Show in mid-January.

Though the brand now uses “Q” to designate all of its passenger car models – and QX for its SUVs and CUVs — the name, Q Inspiration Concept, clearly suggests it is envisioned as the long-awaited successor to the original Q45 sedan that first put the brand on the map.

“Experimenting with new proportions in a typically conservative segment, the Q Inspiration features a shorter hood and elongated body,” says Karim Habib, here delivering his first major concept car as the newly named Infiniti executive design director. “We aim to take the traditional sedan architecture to its next stage of evolution.”

(Click Here for a look at the new Infiniti QX50.)

We first saw a close-up tease of the Q Inspiration’s hood last week. It wasn’t easy to make out much beyond the black-framed headlamps, white grille and scalloping around the hood’s cut line. Habib now suggests the concept will feature a short hood than you might normally expect on a flagship vehicle, with what he describes as an “elongated body.” 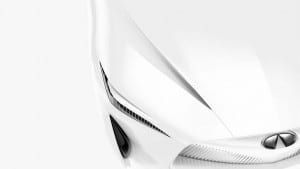 Infiniti offered this earlier tease of the Q Inspiration.

That’s in line with something Infiniti said earlier about the Q, telling us the concept is designed to use a new generation of “less intrusive” powertrains. That would seem to include Infiniti’s new Variable-Displacement Turbo, or VD-T, and possibly some form of electrified driveline. Why does that matter? Such powertrains won’t need all the space of a classic luxury V-8 or V-6. So, space can be carved out from under the hood and used for a more roomy passenger compartment.

(Infiniti wouldn’t be alone here. Jaguar’s i-Pace electric SUV will use a specially designed platform that has most of its drive components under the floor allowing for a minimal hood and oversized cabin.)

The challenge is coming up with dimensions that please the eye. Infiniti’s decision to show us a rear view of the Q Inspiration is no surprise. We may have to wait until the NAIAS to see if the nose come together nearly as voluptuously as its fastback tail.

The new teaser giving us a hint of its fastback rear which is quite reminiscent of the Audi A7. It’s not quite clear whether it has a conventional trunk or is a hatchback, however. Among the more distinctive features of the concept are the dual ports along the bumper. They appear to serve as more than just exhaust ports and perhaps help channel air from under the vehicle, or from the rear wheel wells, to improve aerodynamics. There clearly are air curtains for the front wheels. 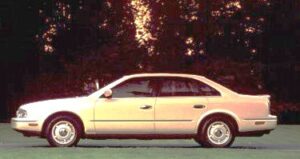 The side we can see has distinctive creases flowing out of the front air exhaust ports and from a point starting just behind the front wheels. Significantly, there are no visible door handles. And the Q Inspiration features whisker-like appendages that likely house sideview cameras.

That’s a technology designers have long favored and there’s growing pressure on federal regulators to finally approve its use. That’s something that would reduce wind noise and improve aerodynamics.

These days, automakers have cut back on the number of concept vehicles they build. “They’re ridiculously expensive,” a source inside Infiniti tells TheDetroitBureau.com. But they’re still useful, he adds, when you’re trying to clearly signal a new brand direction. And Habib is not only intent on putting his own stamp on Infiniti but he appears to have the clear support of management.

A number of other recent Infiniti concepts, such as the earlier Q80 Inspiration, eventually translated into production cars. What about the Q Inspiration Concept? Our source cautions that it is not intended to signal plans for a specific, upcoming model. Instead, elements of it will reappear on future product lines. So, for those who’d been hoping for the return of a Q45 replacement will just have to keep hoping and waiting.

(Nissan hints it may revive the old Xterra SUV. Click Here for more.)