Infiniti Inspired: But What to Make of the New Q Inspiration Concept

Is this the long-awaited successor to the Q45? 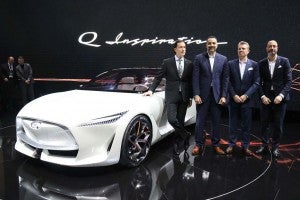 The Q45 Inspiration Concept may not show up in the Infiniti line-up but will influence future product design, officials said.

Infiniti has a long history of teasing us with exotic concepts that eventually translate into slightly more sedate production vehicles. So, what to make of the inspiring new fastback prototype making its debut at the North American International Auto Show in Detroit?

Have we finally gotten a glimpse of the long-awaited successor to the brand’s original halo car, the 1990 Q45? Or is the new Inspiration just there to tease us with hints of the direction Infiniti will take after a recent shake-up in corporate design management?

“Our Detroit concept car heralds a new generation of Infiniti,” is all we’re getting from Alfonso Albaisa, the long-time Infiniti stylist who recently was named global design director for parent Nissan Motor Co. The Q Inspiration, he added, it meant to demonstrate Infiniti’s approach to “artistry in the new age of autonomy and breakthrough drivetrains.”

(Click Here to check out the formal debut of the Fisker Emotion autonomous EV.)

Infiniti was an early pioneer in the realm of crossovers and now has a number of models ranging from the little QX30 to the recently added QX50 – along with the more classic, truck-based QX80. As with models like the original FX, the Q Inspiration Concept clearly won’t get lost in a crowded parking lot. 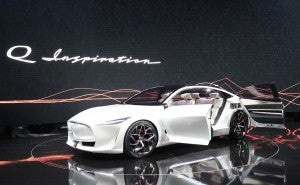 The new Q45 Inspiration will help drive future vehicle designs for the brand.

It features an oversized, double-arch grille with narrow slits and a lighted Infiniti logo near the hood line. Additional scoops bring more wind into the engine and feed the blade-like air curtains used to reduce turbulence around the front wheels. The slit LED headlamps are framed by distinctive LED strip lights.

The Q’s bulging fenders give the sedan a muscular stance, with a strong crease that runs nearly from wheel well to wheel well. A closer look reveals hidden door handles and the lack of mirrors, the concept opting instead for sideview cameras.

The roofline has an aggressive, coupe-like curve and stretches, fastback style, into the rear decklid. Narrow taillamps that pick up the LED strip look wrap across the back of the concept and flare into the rear fenders.

“The premium sedan segment has become rather conservative,” said Christian Meunier, who took the reins at Infiniti after Albaisa’s promotion last year. “The Q Inspiration previews something that could appeal to a younger audience who seek modern design and new technologies to inspire and empower them. 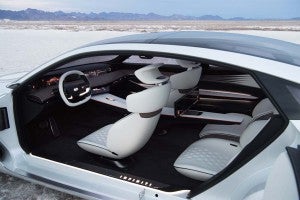 Inside, there’s almost a subtle retro-futuristic look, as if the Jetsons were reimagined today. The four thin, wraparound seats are as much works of art as they are functional. And a floating center console extends the length of the interior.

The instrument panel has a horizontal orientation and is divided into two tiers. The upper level features video displays that extend from door to door. Another touchscreen, just above that center console, controls the infotainment and climate control systems. There are additional touchscreens for each passenger, each offering “guided meditation to help occupants leave any stress behind when they start a journey,” says a Nissan release, adding that “The car can also monitor passenger biometrics.”

The Q concept also features a version of the semi-autonomous ProPilot system that debuted this year in several Nissan models, including the second-generation Leaf battery-electric vehicle. While it currently doesn’t allow hands-free driving, Nissan has promised to add new capabilities each year until it launches a fully autonomous version in 2022.

The other major technology onboard the Q Inspiration is its VC-Turbo. Short for Variable-Compression Turbo, it’s a four-cylinder engine that can vary its compression ratio anywhere from 8:1 to 14:1, depending upon factors such as driver demand, fuel economy, emissions and the need to eliminate destructive engine knock. 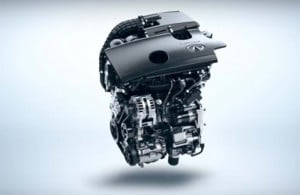 The new VC-Turbo engine's compression ratio can range from 8:1 to 14:1.

The technology – a long-sought goal for automotive engineers – debuted on the new QX50 and is expected to become widely used across the Infiniti line-up over the coming year,

“This revolutionary engine offers a compelling blend of turbocharged performance and high efficiency,” said Francois Bancon, Nissan’s vice president of products and programs. “These qualities need not be unique to hybrids and diesels.

While Infiniti clearly plans to use many of the key technologies found on the Q Inspiration in its line-up, what about the design itself? Unfortunately, with sedan sales plunging in the face of an unprecedented surge in demand for CUVs, SUVs and other light truck, you probably shouldn’t hold your breath hoping for the Q45 replacement. But key elements of the Inspiration Concept’s design will likely return in a variety of future models.

(Acura hints at new design direction with RDX Concept coming to Detroit. Click Here to check it out.)