IG Metall preparing for industrywide strike as part of talks. 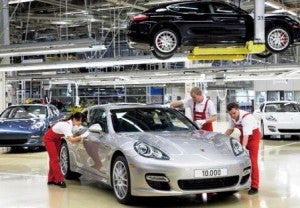 German workers are being prepared to take a strike vote in talks with automakers.

German carmakers and suppliers are in a major battle with IG Metall, the powerful metalworkers union, which is demanding higher wages and shorter hours. The negotiations are turning into the biggest confrontation between labor and management in more than a decade.

So-called “warning strikes” – short-term walkouts lasting no more than 24 hours – have already hit Daimler AG and Porsche this week as well as major suppliers such as Bosch and ZF. In all, an estimated 260 metalworking firms have been targeted by IG Metall and more than 120,000 workers at Volkswagen AG are poised to go on strike for 24 hours, starting Thursday.

The walkouts, which stretch across Germany’s industrial centers, follow a failed set of negotiations, where neither the employers nor the union could agree on a formula for a new wage agreement, observers in Germany noted.

The talks last weekend followed an early flurry of short walkouts at automakers earlier this month.

Volkswagen has said it is prepared to raise wages at facilities in western Germany by 3.5% and a subsequent 2% as part of a wage contract proposal that would extend for 30 months, according to Reuters.

But the offer was dismissed by IG Metall’s top labor representative at VW, Bernard Osterloh, Instead the union pushing for a 6% pay raise for 12 months, an improvement in the corporate pensions and the hiring of more apprentices to help with industry shift to new technologies.

“We will fight for a good pay increase, a decent company pension and socially responsible apprenticeships,” Osterloh told reporters in Germany. “Volkswagen should be ashamed as to how workers are being treated here given the billions of profits and millions of executive bonuses.”

VW officials said the company’s offer included a significant improvement in the company pension plan. It would help preserve jobs while protecting company’s ability to invest in a new range of technology.

“Volkswagen needs a wage agreement with a sense of proportion,” VW officials said after a third round of talks in Hanover. The carmaker’s previous pay offer was for a 2% increase over 12 months, plus a one-off payment of 200 euros ($249).

(Click Here for details about the UAW’s plans to keep its seat on the GM board of directors.)

Osterloh called on staff to brace for a tough wage round and demanded that workers get a fair share of the profits at VW, which last year increased sales to a record 10.7 million cars.

IG Metall’s warning strikes are expected last through Friday, the union has said. The German metalworkers union said its members voted overwhelmingly in favor of strike action after regional talks about wages and working hours failed to reach a deal during the weekend.

Germany is now enjoying the strongest economic growth in six years as well as record low unemployment and the metalworkers have demanded an 8% pay increase over 27 months for the approximately 3.9 million metals and engineering workers covered by the regional wage agreements or tariffs.

The union has also asked for workers to be given the right to reduce their weekly hours to 28 from 35 to care for children, elderly or sick relatives, and return to full time after two years. The push for shorter hours has been a significant stumbling block for employers who believe it will sharply curtail their ability manage their factories.

“The employers haven’t sufficiently budged in negotiations, now we are going to push them into action with full-day warning strikes,” said Roman Zitzelsberger, head of IG Metall in Baden-Wuerttemberg, where 16 hours of negotiations failed to yield a deal.

(Is the ground collapsing under the UAW? For more, Click Here.)

If the impasse is not broken soon, the next step is for the union to ask IG Metall members for approval for an all-out strike that would shut down factories throughout Germany.