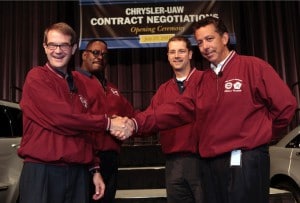 FCA's former top negotiator, Alfonse Iacobelli, right, pleaded guilty in the federal investigation of corruption at FCA and the UAW.

One of the key figures in the corruption charges that have damaged the United Auto Workers and raised questions about the management of Fiat Chrysler Automobiles pleaded guilty to federal criminal charges.

Alphonse Iacobelli, Former Fiat Chrysler Automobiles labor relations chief, pleaded guilty to two charges related to a conspiracy to siphon millions from an employee training fund operated jointly by the company and the union. Sentencing was delayed to May 29, but Iacobelli could face up to 96 months in prison, according to the plea deal with federal prosecutors.

Iacobelli was at the center of an extensive investigation into executives at the automaker and the UAW for allegedly converting funds slated for employees for personal use. In Iacobelli’s case, the stolen money was spent on a second-hand Ferrari, collectible Mont Blanc fountain pens and an extensive list of renovations to his Rochester Hills, Michigan, home.

(Marchionne spoke with feds during FCA/UAW probe. To get the details, Click Here.)

Iacobelli also said he knowingly authorized more than $450,000 in credit card charges for jewelry, furniture, electronics and other luxuries for FCA-UAW members. He also admitted to $262,219 in training center funds used to pay off Holiefield’s mortgage.

On the tax charge, Iacobelli said he omitted more than $840,000 in income for the calendar year 2014, obtained illegally through FCA funds. Iacobelli was given 14 days to produce accurate tax forms for 2012 through 2015, but his lawyer, attorney David DuMouchel, asked for an extension.

Iacobelli’s sentencing will not exceed 96 months. Peter Henning, a Wayne State University law professor, said he would be “shocked” if time in federal prison was not recommended.

“This was a substantial abuse of authority, both inside the company and in the union,” Henning said. “Sometimes you see crimes of opportunity, where it’s a one-time transaction. This was systematic corruption inside the corporation. That’s what’s likely to lead to a prison sentence.”

Iacobelli said that in the course of making illegal payments and gifts to union leaders that he was “acting on behalf of Fiat Chrysler,” presumably with the goal of influencing union leaders to favor his employer.

The conspiracy amounts to one of the largest scandals ever to mar the reputation of the UAW, just as union leaders fight losses of organizing drives last year at auto plants in the South and as they prepare for their big convention in June in Detroit to elect new leaders.

Last year, in a statement, FCA Chief Executive Officer Sergio Marchionne said: “I join Dennis Williams, the UAW president in expressing my disgust at the conduct alleged in the indictment which constitutes the most egregious breach of trust by the individuals involved. I also join Dennis in confirming that this conduct had nothing whatsoever to do with the collective bargaining process.”

However, Williams also told reporters last month that the scandal, which has been described as the worst in the union’s history, has hurt union efforts to recruit workers. Employers used the scandal to help defeat union organizing drives at the Nissan plant in Canton, Mississippi, and at a Fuyao Glass plant in Ohio, said Williams, who has also ordered an internal investigation in the scandal and forced a number of members of the union’s FCA Department to retire.

Another casualty of the scandal was UAW vice president Norwood Jewell, who followed Holiefield into the role of head of the union’s FCA department. Jewell has never been implicated in the scandal, but he did accept an expensive birthday gift that was paid for from the joint fund. Jewell reimbursed the fund for the cost of the gift, an expensive shotgun, but he resigned last month after the administration caucus, the informal group that decides who gets nominated for top union posts, declined to nominate him for a second term as vice president.

Jewell was replaced as head of the union’s FCA Department by Terry Dittes, the head of the UAW Region 9, which includes the Northeastern corner of United States.