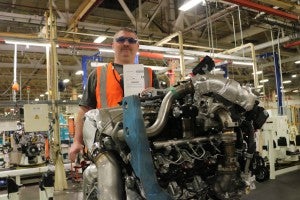 GM announced that its Flint Engine plant will produce the 3.0-liter turbo-diesel for the new Chevy Silverado.

On the heels of unveiling the new Chevrolet Silverado, GM announced plans to build a new diesel engine in a factory in Flint, Michigan, that currently is used to build 1.4-liter gasoline engines used in passenger cars.

GM said Flint Engine Operations will serve as the manufacturing site for the all-new Duramax 3.0-liter turbo-diesel for the 2019 Silverado. The same engine is likely to be used in the GMC Sierra pickup truck that GM plans to introduce later this year.

In 2015, the company announced a $263 million investment in Flint Engine Operations for a new engine line. Flint Engine currently produces 1.4-liter engines used in the Chevrolet Cruze, Equinox and Volt.

While diesel engines have largely faded away in passenger cars, some manufacturers eager to improve their fuel economy numbers, have continued to roll out plans to offer diesel engines as an option in pickup trucks.

The new Ford Ranger unveiled at this week’s North American International Auto Show will have a diesel option as will the new 2019 Ram 1500 pickup from FCA.

The 2019 Silverado will be available with six engine/transmission combinations, enabling customers to find the combination of performance, efficiency and value that best fits their needs. One of these choices will be the all-new Flint-built 3.0-liter inline-six turbo-diesel.

The new turbo-diesel will be paired with a Hydra-Matic 10-speed automatic transmission and will feature industry-exclusive technologies that optimize performance and efficiency. It is expected to be an efficiency leader in the Silverado line-up, GM officials said.

“The next-generation Silverado builds on the success of our current models, many of which are produced here in Flint. We are proud to expand the industry-leading diesel portfolio here in Vehicle City,” said John Urbanic, Flint Engine Operations plant manager.

(To see more about the new Ford Ranger and its diesel offering, Click Here.)

With diesel offerings on Equinox, Cruze, Colorado, Express, Silverado 1500 and Silverado HD, no other brand offers more diesel models or diesels in more segments than Chevrolet.