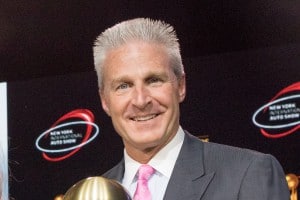 Hollis cited several factors contributing to the continuing strength of car sales in the U.S., including a healthy U.S. economy, continuing job and wage growth, low fuel prices and improvement in consumer confidence.

“It might not be a record but still good strong pace,” Hollis said during in his speech during the APA meeting in Detroit.

The new 2018 Toyota Camry is expected to help the automaker to another solid result next year.

Since the eighth generation Camry came to the market back in July, Toyota has sold more than 76,000. Only last week, the Camry was named as one of the finalists for the North American Car of the Year. The other nominees were the 2018 Kia Stinger and the 2018 Honda Accord.

Sales of Toyota and Lexus trucks and utility vehicles have also been very healthy and exceeded the company’s expectations, posting sales records each month, he said.

(Click Here for details about Toyota’s warning to its Georgetown employees.)

In 2018, Toyota and Lexus will benefit from a full year of sales of the Camry, Toyota C-HR and Lexus LC. Lexus will also be able to sell the new LS and there are other new Lexus vehicles in the product development pipeline, beginning with a long-wheel-base version of the popular RX-350, which will seat seven passengers.

Toyota also showed off the Future Toyota Adventure Concept, which represents the next level in the automakers plans to deliver a vehicle built for adventure both on and off the road. The Japanese automaker also use the run-up to the 2020 Olympics, which will be held Tokyo to show off its technology, commitment to new concepts in mobility and an inclusive corporate philosophy.

Hollis said Toyota will announce the location of its new U.S. plant – where it will build a new generation of EVs in partnership with Mazda – early next year. The finalists are North Carolina and Alabama.