Musk Gives Twitter Users a Peek Behind the Curtain

Tesla founder and CEO Elon Musk went “all Oprah” on Twitter yesterday. He asked his followers for input on how to improve the company’s vehicles and as the answers came back he basically rubber stamped approvals like Oprah gives out cars.

The charismatic EV company leader received more than 13,000 responses to his query, which also sought feedback on his other companies, such as SpaceX, SolarCity and The Boring Co., but most centered on what Tesla mavens wanted to see in the future.

He responded to about a dozen, promising one respondent that the company will “make a pickup truck right after Model Y.” He added that he is “dying to build it,” so when the company debuts the Model Y, the truck could be part of that unveiling, based on the last event.

The Model Y will be a crossover, borrowing heavily from the now-in-production Model 3, to ease bottlenecks experienced by the aforementioned small sedan.

(Elon Musk is “dying” to build a pickup. Find out his plan. Click Here.) 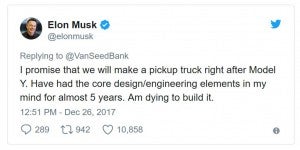 He did provide some details, suggesting that the Tesla truck would be slightly larger than an F-150, but more importantly he wanted the vehicle to offer a “game-changing” feature when it was ready to hit the market. He didn’t suggest what that might be.

Musk also told followers that the company’s second iteration of Autopilot is in the testing phase, working on a variety challenges such as recognizing road signs. He did note that Tesla has “the most advanced AI neural net of any consumer product by far,” which should help in speeding the development of the second-gen version.

“The results are blowing me away,” Musk said, adding later that a new navigation system is also in the works. He said it would be much faster and more precise than current versions and will be ready very shortly.

Musk signed off on all of the suggestions and more including one that may be described as “very Elon.” A user asked for music that quiets automatically when the doors all open, ambient lighting and disco mode. He approved them all, especially disco mode because it “sounds like good, cheesy fun.”

While the followers were mostly positive, not everyone is so upbeat. A number of analysts continue to voice concerns about the company, especially in light of Tesla’s ongoing struggles to build the new Model 3. A much slower than anticipated launch led to much higher than expected third-quarter losses and forecasts aren’t much more upbeat for the October­–December quarter.

Production is still reported to be dragging at less than 10% of Tesla’s original estimate, raising serious questions about whether it can come close to the total production target of 500,000 cars it set for 2018. Some reports have suggested that Chevrolet and Nissan are starting to receive orders for their own long-range models from customers who have decided not to wait any longer for the Model 3 sedans they had reserved.

“There’s bound to be growing skepticism if waiting lists and waiting times grow longer while yet another new model is unveiled.” Paul Newton, an analyst at the IHS Automotive, told the BBC.