Is This the Apple Car? 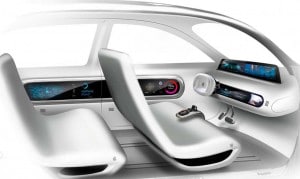 Despite the company’s traditional reticence to discuss projects in the works, it’s widely believed that Apple is working on a major automotive project – speculation that took on new life when CEO Tim Cook described self-driving vehicles as “the mother of all AI.”

As expected, Apple isn’t saying anything, but it gave another hint as to what’s apparently in the works this past week when the U.S. Patent and Trademark Office published the company’s application for a patent on a new “autonomous navigation system” last week.

Many of the autonomous systems being developed are intended to operate by linking up a broader network that would provide things like weather and traffic information. The Apple filing, which actually occurred in 2015, appears to focus on ways to make self-driving technology more efficient and able to operation on its own, rather than depending on a link to other vehicles or a highway infrastructure system.”

It is meant to operate “independently of any data received from any devices external to the vehicle and any navigation data stored locally to the vehicle prior to any monitoring of navigation,” Apple said in the application.

What the new filing means is far from certain, as it doesn’t provide any clear information on whether it is the primary focus for Apple or just a part of a broader program.

Several years ago, the Wall Street Journal reported that Apple’s automotive efforts were known internally as Project Titan. It was initially suspected the tech giant was developing a fully electric vehicle along the lines of what Tesla has brought to market. But after hiring a number of automotive industry – as well as Tesla – veterans, reports circulating Apple had decided to cut back, even eliminate its auto project.

More recent reports have indicated the company may have walked away from the idea of building its own vehicles, shifting focus to autonomous and fully driverless technologies. That would put it more directly in competition with Google which last year spun off its Waymo subsidiary.

(Click Here to see why autonomous vehicles will cut U.S. sedan sales in half.)

Waymo is already field-testing hundreds of autonomous vehicles, many of them as part of a pilot ride-sharing program in Phoenix. Now a subsidiary of Google parent Alphabet, Waymo plans to start field-testing fully driverless versions of the Chrysler Pacifica Hybrid minivan in the coming year.

There have been reports that Apple may already be testing some of its vehicles, among other things, on a private track near San Francisco.

The technology covered by the new patent application appears to be aimed at speeding up an autonomous vehicle’s ability to generate maps with the necessary detail.

Whether this will actually come to production is far from certain, though Apple CEO Cook did trigger more speculation when, in June, he mentioned “Apple’s self-driving car project.”

(To see more about Tim Cook admitting to a program, Click Here.)

Considering companies like Waymo, Tesla, General Motors and Ford all plan to have advanced levels of autonomous technology in production within less than five years Apple has to be feeling pressure to either move forward or kill Project Titan entirely.