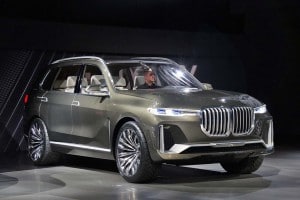 Expect to see a production version of the BMW X7, including an electrified model, sometime next year.

After using the Los Angeles Auto Show for the debut of the new i8, BMW AG is preparing to increase its sales plug-in hybrids and battery electric vehicles by 50% in 2018 as it moves to bolster its position as maker of electric vehicles.

“We’ll definitely boost sales by a mid-double digit amount,’’ Klaus Froehlich, who heads development for BMW, told reporters in Munich. “This is to stay ahead of the competition that’s starting to do its own rollout.”

Like other carmakers, BMW is spending substantial sums developing a more attractive suite of electric cars to jump start sluggish consumer demand for EVs. Demand for the vehicles remains at a fraction of total auto sales, with BMW’s target paling compared to total 2016 deliveries of 2.4 million vehicles.

“Our goal for the luxury segment in the next few years is taking more market share,” Chief Executive Officer Harald Krueger said in a speech, adding that the new suite of luxury cars will be sold under the “Bayerische Motoren Werke’’ signature. “In 2018, we’re significantly enlarging our offering in this lucrative growth segment.’’

BMW is in the midst of a record rollout of 40 all-new and revamped vehicles this year and next, seeking to wrest back global leadership of luxury car sales from Mercedes. Its Stuttgart, Germany-based rival overtook BMW last year for the first time in a decade, after overhauling a stodgy line-up with sportier styling and adding new models.

(BMW teams up with Ford, Daimler and VW to create a pane-European high-speed EV charging network. Click Here for the story.)

BMW’s electric push coincides with the biggest transformation for the industry in decades, drawing in a host of new competitors like Tesla Inc. and Uber Technologies Inc. BMW last month said it’ll spend 7 billion euros on research and development this year, as much as 2011 and 2012 taken together.