Audi Not Selling Off Ducati After All

But still looking to shave nearly $12 billion in costs. 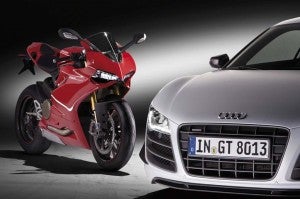 A Ducati sport bike sits alongside an Audi, which contemplated selling the Italian motorcycle maker to offset diesel gate costs.

German automaker Audi has scrubbed plans to sell off Ducati, its Italian motorcycle brand, a move initially triggered by its need to cut costs in the wake of parent company Volkswagen’s diesel emissions crisis.

Audi acquired the widely respected motorcycle brand in 2012 through another Italian subsidiary, Automobili Lamborghini S.p.A., the high-performance supercar manufacturer. Ferdinand Piech, the long-time boss at Audi parent Volkswagen AG, had long coveted Ducati, though analysts have routinely questioned what the brand brings to Audi or VW.

So, there was little resistance when Audi said it would sell off Ducati as part of a plan to trim its costs by 10 billion euros, or $11.8 billion. But Audi CEO Rupert Stadler this week said that is no longer necessary. “I can assure you that Ducati belongs to the Audi family,” said Stadler. “Ducati is the perfect implementation of our premium philosophy in the world of motorbikes.”

Audi has taken other steps, according to Stadler “gradually increasing our financial and organizational leeway for the strategic realignment” it has planned without having to sell off assets like Ducati.

The motorcycle brand was founded in 1926 by Antonio Cavalieri Ducati and his three sons, Adriano, Marcello, and Bruno Cavalieri Ducati. But it struggled post-War and was taken over by an Italian government organization set up to help revive the economy. Ducati went through a series of ownership changes, including a 2008 takeover by an investment group partially funded by the Ontario Pension Plan. Audi purchased Ducati out, through Lamborghini, in April 2012 for $1.2 billion.

Renowned for its racing heritage, the brand has a loyal following, with over 400 Ducati clubs worldwide.

According to a Reuters report, some analysts believe Volkswagen may yet again reverse Stadler’s decision and order the sale of Audi if the right buyer comes along – or if the company’s financial position remains tenuous. VW has already been hit with fines, penalties and other costs running to $30 billion over its use of rigged diesel engines. Audi, as well as the Porsche brand, have been linked to the scandal, having used tens of thousands of the suspect diesels in their own products.

Complicating matters, Audi has committed itself to an aggressive program to shift focus from diesels to electrified powertrains. It is getting ready to launch its first long-range all-electric model, a counterpart to the recently updated Audi Q5. It plans to have 20 electrified models, also including hybrids and plug-ins, by 2025.

“Looking after a premium bouquet is as difficult as the work of a gardener,” Stadler said, according to Reuters.

(Audi cutting $12B from budget to accelerate electrification plans. Click Here for the story.)

To help curb costs, Audi is planning to order a hiring freeze for at least the next two years. It also is increasing ties to other VW brands, such as Porsche, which could allow shared product development and production.