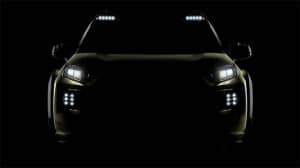 Toyota and its high-line Lexus brand will be putting the spotlight on SUVs at the upcoming LA Auto Show – to no one’s surprise considering utes now account for half of the overall American new vehicle market.

Lexus has already given us a hint of its new RXL, a three-row version of the ever-popular RX line, and now it’s Toyota’s turn to tease us, the Japanese giant releasing this carefully lit front view of what it has dubbed the FT-AC.

Short for “Future Toyota Adventure Concept,” it picks up where Toyota left off last April with the FT-4X concept, and the retro-styled FT-AC appears to signal what may be heading our way to fill the slot left open by the demise of the old FJ Cruiser.

(Click Here for a preview of the new three-row Lexus RXL.)

We’ve tweaked this image ever so slightly in Photoshop to bring out a few more details of the Toyota FT-AC. What this reveals is a design that mixes modern and retro elements.

There appears to be a fairly upright front end with what look to be twin LED headlamps framing a large grille. The center of the Adventure Concept’s face has been blacked out so it is difficult to see if it picks up on the FT-4X’s billet-like crossbar. Directly beneath the headlamps are 6-six foglight clusters. 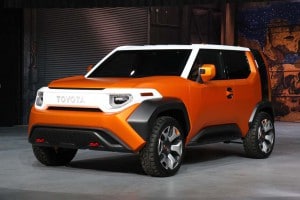 The Toyota FT-4X concept was revealed at the NY Auto Show last April.

The nose-on teaser also hints of a fairly sharp windshield rake and while there are fairly aggressive wheel flares, they’re nowhere near what we saw on the New York concept, the FT-4X appearing to lift its wheel arches out of the Jeep Wrangler handbook.

One of the more unusual details that could be easily missed in the FT-AC teaser pic is the oddly knobby shape of the sideview mirrors.

We’ll look forward to learning whether the new Toyota concept is as boxy, overall, as the FT-4X, which clearly was meant to follow up on the design of the FJ Cruiser, itself aimed at those who liked the more classic, truck-trucky shape of a Wrangler.

We’re confident the new Adventure Concept will come up with some intriguing features, however, perhaps an update of the Multi-Hatch rear that could open up either barn door-style, or like a more traditional liftgate.

Some tough guy details, such as tie-downs and even tow hooks would seem to be a given, meanwhile.

(Hyundai to launch eight new SUVs by 2020. Click Here for the story.) 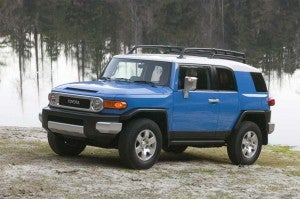 Toyota is clearly looking to find new white space to enter as it – like pretty much all of its competitors – tries to take advantage of the massive shift from passenger cars to SUVs and CUVs. While much of the movement has been to car-based crossovers, there’s a sign of renewed interest in more traditional products. Ford, for one, is hoping to tap that with the soon-to-be-revived Bronco. And, of course, Jeep is getting set to weigh in with an all-new version of the classic Wrangler line.

But, as with the FJ Cruiser and the FT-4X, we expect the FT-AC to target Millennials and other urban adventurers who want something hip and flexible for around-town driving while also capable of a little bit of back-country adventuring on the weekend.

A hybrid powertrain very well could be in the mix, though Toyota is yet to talk about what’s under the hood.

Odds are the new FT-AC is the work of the Toyota advanced U.S. design studio, or CALTY, which also penned the FT-4X. We’ll find out more when the concept is formally unshrouded at the LA Auto Show on November 30.

(McLaren teases its new P15 hypercar. Click Here to check it out.)