Use the Force, Nissan. 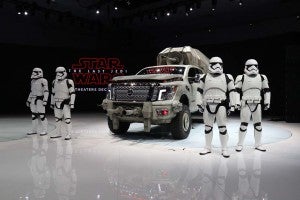 Nissan is clearly hoping the Force is with it. The Japanese automaker launched a tie-up with that galactic powerhouse, the Star Wars empire, last year, going so far as to build a full-size Tie Fighter for use at several of its auto show stands. Now, it’s upping the ante.

For the 2017 Los Angeles Auto Show Nissan has created a full seven custom vehicles based on Star Wars lore, including one revealed to a crowd of journalists Thursday morning that blends a heavy duty laser cannon with one of its Titan pickups.

There’s a new series of television and Internet commercials that show Nissan owners fantasizing about dodging dogfights and Storm Troopers. And beloved ‘droid characters like R2D2 and BB8 are helping sell Nissan products through the use of a new augmented reality system being installed at Nissan’s U.S. showrooms.

For Lucas Films, and Disney, which bought it for $4 billion a few years ago, the tie-up seems to have its benefits. There are the licensing fees – which Nissan officials prefer not to discuss. Those TV commercials also promote the upcoming eighth episode of the Star Wars sage, “The Last Jedi,” which will land in U.S. theaters on Dec. 15. 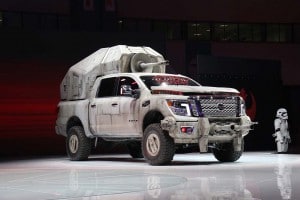 The ATM-6 contains a laser cannon in the bed of the truck.

Last year, the tie-up focused on the debut of the first major Star Wars spin-off, “Rogue One,” a seemingly fortuitous link to the popular Nissan Rogue SUV.

Whether the pairing actually sells any Nissan products is far from certain, company officials are not open to revealing their internal data. But considering the power that any new Star Wars film unleashes, it is certainly getting the automaker plenty of attention.

“You could call this the biggest unboxing at the L.A. Auto Show,” declared Jeremy Tucker, vice president of marketing for Nissan North America, as a crew moved the box-like covers to reveal the seventh of the themed vehicles created for the show.

Dubbed the Titan ATM6, it is meant to mate the carmaker’s pickup with a giant walking tank that is reported – in Star Wars lore, at least – to be the evil empire’s most deadly weapon. There’s a laser cannon staring in the face of unbelievers.

Among the other vehicles there’s a 2018 Nissan Maxima looking like a deadly empire fighter, Kylo Ren’s Tie Silencer, and an only slightly less potent Tie Fighter based on an Altima.

Four actors, dressed up as Storm Troopers stood guard for the unveiling and later posed for pictures with bemused showgoers who seemed unfazed by the Nissan stand’s link to the Dark Side.

For those who’d prefer to root for the good guys, there were two crossovers converted to Rebel spaceships, including one flown by hero Poe Dameron in the last Star Wars entry.

(The force is strong in this car. For more, Click Here.)

As far as Nissan is concerned, making friends with both sides of the Force seems to add up to a good business strategy.