Earnings hit by rising sales expenses in the U.S. 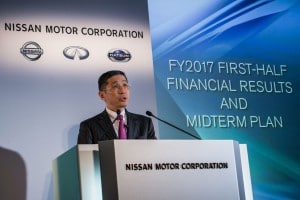 Nissan Motor Co. reported a 21.6% drop in operating profit for the second quarter. The $1.1 billion, or 128.5 billion yen, was the company’s smallest quarterly profit since 2014.

The Japanese automaker suffered in the quarter just ended from rising expenses and costs from improper final inspection procedures on products at its six plants in Japan. The failure to follow procedures forced the company to shut down the plants for several weeks to review the issue.

The company admitted that uncertified technicians performed final checks for vehicles sold in Japan. The techs were used because some inspection steps had been transferred to other inspection lines, in violation of ministry rules.

Compounding the problem was that Nissan continued to use the uncertified techs even after it had resolved the issues in other areas of the plants.

(Nissan shutting down plants in Japan to deal with inspection problems. Click Here for more.)

The plants, which just reopened, had been conducting the inspections incorrectly for decades, necessitating the recall of 1.2 million vehicles. The company also cut its forecasts for the remainder of the year.

“We expect to feel the impact of the improper final inspection issue in the second half,” said Hiroto Saikawa, Nissan CEO, during an earnings briefing.

The company’s results were hurt by a couple of issues in North America. First, the company was hampered by a multi-million dollar U.S. settlement tied to the recall of vehicles with faulty Takata air bag inflators.

Additionally, the automaker attempted to bolster sluggish sales by increasing incentives on its non-SUV and truck inventory. This increased expenses, which hurt earnings results. Nissan’s North American sales fell 3.3% to to 502,000 units in the third quarter. In the United States, its biggest market, sales slid 2.2% to 377,000 units.

Conversely, Nissan’s sales in Japan jumped 25.6% last quarter. In China, Nissan’s second-largest market and the world’s biggest auto market, its sales rose 8%. Nissan has led Japanese automakers in China sales this year, having sold 1.17 million units in the first 10 months of the year, up 10.8% from last year.