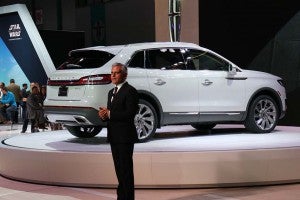 Lincoln's Kumar Galhotra says the brand will be returning to using names for its cars rather than letters.

Lincoln is getting rid of the often confusing letter-based nomenclature that it has used for the past several years.

Kumar Galhotra, president of the Lincoln Motor Car Co., said during the Lincoln press conference at the Los Angeles Auto Show that the names such as MKX are going away. In the future Lincoln vehicles will have names that suggest travel and serve to underscore Lincoln’s commitment to making every customer’s journey of any kind more “effortless,” he said.

The theme already fits with names such as Navigator and Continental that Lincoln has used over the years. The name Nautilus, which will be used for the vehicle replacing the Lincoln MKX fits because its Latin root means sailor or seafarer.

Robert Parker, Lincoln’s director of global marketing, sales and service, said Lincoln’s experience in China has helped drive the shift away from the letters. Lincoln’s Chinese customers found the letters more difficult to pronounce than the traditional names. 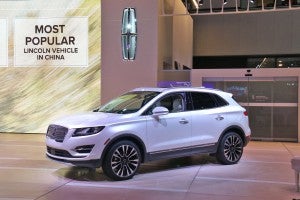 Lincoln MKC will not get a letter-based sibling in the future as the company is going back to names.

The need for change was reinforced by an argument he witnessed between a husband and wife, who started squabbling on an airport shuttle over whether their Lincoln was a MKC or a MKX. “It was a MKC,” said Parker, who never let on that he worked at Lincoln.

Lincoln also hopes the change can shift perceptions of the brand and attract and millennials and Gen X buyers, as they are drawn to the luxury market. “They want other options,” Parker said.

“We’re a challenger brand. We can’t match the scale of the Germans,” he said.

During a session with reporters attending the show, Parker said Lincoln also has to be willing to innovate and offer new tactics that entice buyers and ensure it is offering services tailored to their needs.

Early next year, Lincoln plans to experiment with subscription service, which allows customers to use a vehicle for a period as short as a month, Parker said. “It’s a way to get customers to try out the brand,” he said. Lincoln also is experimenting with another service.

Customers can hire a driver for an evening, for a medical appointment or trip to the airport. The driver uses the customers own car rather another vehicle.

Lincoln’s approach to servicing vehicles where it picks up a car or SUV at a specific time and the returns it at a specific time while providing customers with another vehicle has been very successful. Lincoln has already logged more than 60,000 service visits through the program.

Lincoln also is also preparing to expand a program where dealers make house calls in order to complete a deal. The pilot program included 10 dealers spread across the country but it will now be expanded to more dealers will have personnel calling on customers at home.

(Lincoln upgrades and refreshes MKC for 2019. For the story, Click Here.)

“The whole retail landscape is changing,” Parker said. “We want to be on the leading edge of offering these options,” he added.