Lexus RX 350L: Bigger is Better for the King of Midsize Luxury CUVs 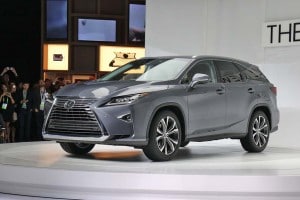 Lexus added a third row of seats to its popular RX sport-utility vehicle for the 2018 model year.

When it comes to midsize luxury SUVs, the Lexus RX has long been the big dog on the block, and it’s about to get bigger, Toyota’s luxury brand debuting a stretched, three-row model at the Los Angeles Auto Show today.

The move should come as no surprise. If anything, one might wonder why it has taken so long for the luxury brand to bring out a three-row version of the RX, the best-selling midsize ute on the market. Since it was first introduced 20 years ago, the standard-edition RX has become the go-to vehicle for suburbanites looking for an alternative to a minivan.

Growing 4.3 inches longer than the familiar RX, Lexus aimed to blend “function and fashion,” and says it will give buyers a number of options with the three-row RXL, including both six and seven-seat packages, as well as both a conventional gas model, the RX 350L, and the hybrid-powered RX 450hL.

While Lexus was a pioneer in the luxury crossover market is was slow to expand its line-up, counting on the two-row RX to cover a vast swath of the market. Those who wanted something larger had to settle for the big LX, a more traditional body-on-frame SUV. 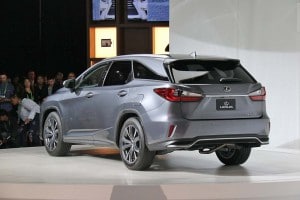 But it’s become impossible to get by with essentially a one-size-fits-all strategy for the crossover market now that CUVs account for about half of the total U.S. new vehicle market. When you add in conventional utes, pickups and vans, light trucks overall make up nearly two-thirds of the American market.

At the lower end, Lexus launched the compact NX in 2015 – with that model getting a big update for 2018. Few would be surprised to see an even smaller model join the line-up in the future. And a senior executive with Lexus parent Toyota told TheDetroitBureau.com this year that a car-based high-end model is also under consideration.

Styling remains close to what we see with the latest version of the two-row, five-seat RX models, starting with the Lexus trademark “spindle grille.” A new blacked-out C-pillar creates a “floating roof” effect.

(Click Here to see why Lexus keeps an eye toward the future with its LS+Concept.) 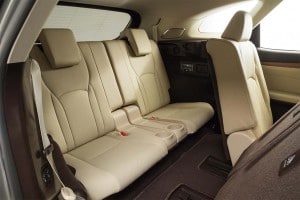 More room on the inside allows for the third row in the new RX.

Beyond the added 4.3 inches in length, the new L models have a more upright tailgate and roof to ensure adequate headroom for passengers in the third row. But, on the whole, a key goal for the design team was to “retain its stylish figure while also providing more flexibility for passengers.”

One of the more innovative moves was slightly raising the height of the second row to provide additional foot room for rear passengers. Meanwhile, the third-row seats fold with the touch of a button, allowing the stretched ute to serve up a significantly larger cargo bay than the current RX.

To further ensure rear passengers don’t feel they’re stuck in a penalty box, the RXL models offer a tri-zone climate control system, with separate heating and AC units for the “back of the bus.”

The 2018 RXL models will come standard with LSS+, the latest version of the Lexus Safety System, which includes such things as forward collision warning with auto-braking, and blind spot detection.