A U.S. auto plant could be next "logical step." 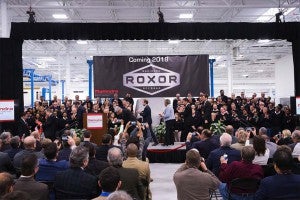 A crowd gathers by the obligatory ceremonies at the new Mahindra plant just outside Detroit.

Mahindra Automotive North America has set up an off-road vehicle assembly line in the Detroit suburb of Auburn Hills – a move that soon could be followed by the Indian manufacturer’s entry into the U.S. automotive market.

The subsidiary of Mumbai-based Mahindra & Mahindra has been promising to set up shop in the States for more than a decade, going as far as lining up a dealer network before pulling back. The 150,000-square-foot facility is located not far from the headquarters of Fiat Chrysler Automobiles and scores of automotive suppliers, and it becomes the first new auto plant in the Detroit region in a quarter century.

Mahindra didn’t reveal the vehicle it plans to build at a news conference Wednesday, but Group Chairman Anand Mahindra told reporters it “will take us into a whole different orbit.” He also hinted at future plans. “I think a very logical step after that would be to get on-road.”

Founded in 1945 as a steel trading company by two brothers, what become Mahindra & Mahindra began assembling kit versions of the Jeep CJ3 in 1954 and commercial vehicles a decade later. It got into passenger cars through a series of alliances, including deals with Peugeot, Kia and, most recently, Ford and Renault Renault. 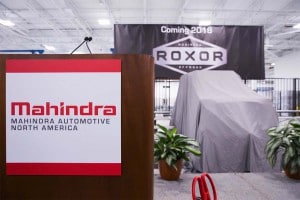 It began working up plans for a U.S. distribution network in 2006, announcing plans to bring over two products initially, an SUV and a truck dubbed the Pik-Up. But the project collapsed, in part due to the American economic meltdown that saw sales drop by about 40% before bottoming out. Dealers sued the company in 2012, claiming it pocketed over $9.5 million they had invested for franchises – though Mahindra put the blame on its former U.S. distributor.

Mahindra has been hinting about reviving its efforts to get into the U.S. passenger vehicle market for several years. In the meantime, it is already distributing tractors and utility vehicles, as well as the GenZe electric bicycle and scooter lines it assembles in Ann Arbor, another Detroit suburb.

(Ford, Mahindra team up. Click Here to see what they’re working on.)

Beyond the bicycle plant, Mahindra already has a North American headquarters and tech center in Troy, and a warehouse and logistics operations in Pontiac, two other Detroit suburbs. All told, the latest project brings to $230 million the company’s investment in Michigan, with employment currently at 250 and growing.

“Everyone hears about off-shoring and out-sourcing to India — this is India outsourcing to America to get the talent we need,” said Group Chairman Mahindra. 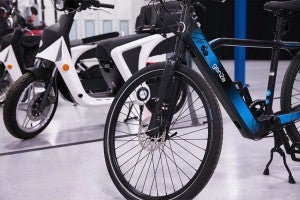 The Indian company isn’t saying much about the vehicle that will be produced in the Detroit factory other than that it will be an off-highway utility vehicle called the Roxor. It expects to roll out about 12,000 of them annually. A prototype was kept under a tarp during the dedication ceremony. Production is expected to begin early in 2018.

Mahindra could have a number of projects to follow the Roxor. It is one of five manufacturers recently chosen by the U.S. Postal Service to develop prototype delivery trucks.

According to the group chairman, Mahindra may use a different name if and when it launches passenger vehicle sales in the U.S. It owns the SsangYong Motors brand in Korea and could opt for using the marque since Americans have become increasingly “happy” with Korean products.

According to Mahindra officials, a compact pickup could provide an entry point, whatever brand is used, by as early as 2020.

(Ford freshens up Indian-made EcoSport ahead of U.S. arrival. For the story, Click Here.)