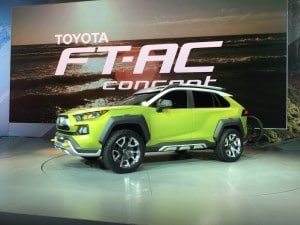 Toyota's new FT-AC Concept debuted in Los Angeles and offers some insight into how the maker may replace the FJ Cruiser.

With utility vehicles now accounting for half of the American automotive market, manufacturers are reluctant to leave any gaps open. This year’s Los Angeles Auto Show is full of new utes plugging empty “white space,” and as the two-day media preview wraps up, Toyota weighs in with its FT-AC concept.

In this case, the Future Toyota Adventure Concept aims to plug a gap left open by the demise of the old FJ Cruiser, and picks up on the earlier FT-4X prototype unleashed at the New York Auto Show last April.

“FT-AC is a catalyst,” said Jack Hollis, general manager of the Toyota division. “It’s a medium for breaking everyday routine.”

The car-based crossover concept has a long wheelbase and wide track that enhances its stance. It rides on 20-inch wheels shod with beefy all-terrain tires. And there is plenty of ground clearance. 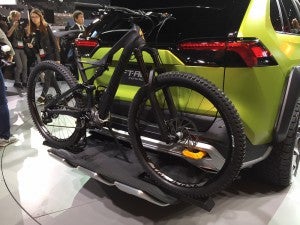 No soft roader, the FT-AC Concept features a long wheelbase and wide track to allow for full-on off-road adventures.

The FT-AC is nowhere near as boxy as the old FJ Cruiser, but there’s a direct visual lineage. Though there are some clear nods to fuel-saving aerodynamics, the nose is decidedly upright, with a solid, billet-like crossbar across the grille and chromed cladding suggesting the Adventure Concept is ready to take on more than paved roads. That perception is enhanced by black armor cladding above the wheel arches.

There are narrow LED headlamps and, lower down, LED fog lamps. In fact, there’s plenty of lighting, including LED marker lights at the corners, rear facing LEDs on the safari-style roof rack – which can be remotely controlled via a smartphone app – and infrared cameras mounted on the side mirrors can help record your travels. Forward-facing roof lights can even provide flash for photo shoots. The cameras can be removed and taken along to record the rest of your journey, whether on foot or bike, an integrated and retractable bike rack part of the FT-AC design. 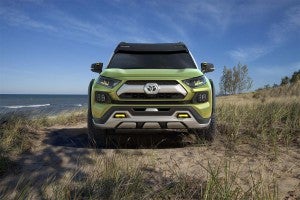 The nose is decidedly upright, with a solid, billet-like crossbar across the grille suggesting the FT-AC is ready to take on more than paved roads.

For those who don’t want to wait until they get home, there’s built-in WiFi connectivity to use to livestream your adventures. Oh, and don’t worry about getting a little too far off the trail, the FT-AC including geolocation technology to ensure you’ll find your way back to your camp – or hotel room.

There’s plenty of glass which means passengers would get a panoramic view of the scenery going by.

“FT-AC is a catalyst – it’s both the invitation and the medium for breaking day-to-day routines and embracing the unexpected,” Toyota says in a statement describing the show car. “FT-AC provides the right instrument for a wide mix of excursions, be they on paved roads or not.”

(Click Here for details about Toyota’s denial of plans for a new U.S. plant.)

Toyota isn’t saying much about what’s under the hood of the Adventure Concept, other than noting it has “a thoroughly capable gasoline” drivetrain, adding that it will feature an advanced torque-vectoring all-wheel-drive system.

“We also envision it offering a hybrid alternative,” said Hollis. “Who said hybrids can only stay on pavement?”

The automaker does hint that a production version “could offer a next-generation hybrid powertrain that blends fuel efficiency with rugged all-wheel-drive grunt.”

The prior FT-4X was developed by Toyota’s advanced CALTY design studio in California. The new concept was a group effort, including CALTY, Toyota’s Japan studios, and even feedback from aftermarket vendors. Expect to see a final production-ready take on the concept, though “no sooner than the New York Auto Show” next spring, according to a well-placed Toyota source. 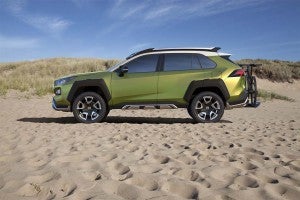 The FT-AC wears 20-inch wheels to allow for better ground clearance, which is important to off-roaders.

As you’d expect of a truck designed to handle a variety of road conditions, there’s a quick-set terrain response control that adjust a variety of vehicle settings to handle whatever conditions you might meet. To underscore this isn’t a soft-roader, Toyota has also equipped the FT-AC with four-wheel lock capabilities.

Toyota is clearly looking to find new white space to enter as it – like pretty much all of its competitors – tries to take advantage of the massive shift from passenger cars to SUVs and CUVs. While much of the movement has been to car-based crossovers, there’s a sign of renewed interest in more traditional products. Ford, for one, is hoping to tap that with the soon-to-be-revived Bronco. And, of course, Jeep is getting set to weigh in with an all-new version of the classic Wrangler line.

(To see why Alabama, North Carolina are the finalists for new Mazda/Toyota plant, Click Here.)

While Toyota is simply referring to the FT-AC as “a design experiment,” we’re willing to bet the automaker is serious about it. We’d be surprised, in fact, not to see a production version make its debut before the 2018 model-year auto show season comes to an end.