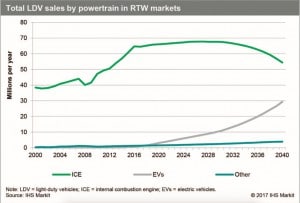 Mobility is coming and, in spite of their best efforts, it appears it will be at the expense of the world’s automakers, according to a new IHS Markit study.

The study reveals auto sales are going to decline steadily between now and 2040, especially in large markets such as the United States, China and India, the number of miles driven will continue to rise. Perhaps just as surprising, more than 80% of those miles will be traveled in vehicles using some form of gasoline- or diesel-powered vehicles.

Researchers predict that annual sales of privately owned vehicles in the United States, Europe, China and India will decline from 67 million vehicles annually to 54 million in 2040. However, the number of miles traveled globally will rise 65% to around 11 billion miles a year.

“A great ‘automotive paradox’—where more travel via car than ever, but fewer cars will be needed by individuals—will be a defining quality of the new automotive future,” said Daniel Yergin, IHS Markit vice chairman and project chairman.

“The shift is just beginning. By 2040, the changes in transportation will be accelerating in a way that will be visible on roads and highways around the world. The pace and degree of this dynamic shift will have significant implications for industry, for public transportation systems and for how people get to work and live their lives – and spend their money on transport.” 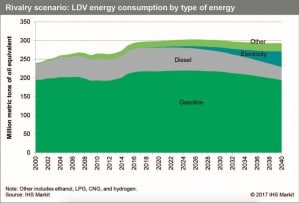 Sales of those vehicles are expected to account for 19% of the world’s total by 2040, which is an increase from the 14% in 2030 predicted in a study from Boston Consulting Group last month. Currently EVs, hybrids and plug-in hybrids account for about 3% of sales.

However, there was some thought that with many nations, such as Norway, Germany, Great Britain, France, China and potentially others banning gas- or diesel-powered vehicles sometime between 2030 and 2040 that number might be higher. That said, change is coming.

Higher fuel economy and emissions standards and the reduction in gasoline’s share of new vehicle sales will lead to a decline in aggregate gasoline demand in key markets during the 2020s, the study says, even though overall oil demand will rise. That rise comes for two reasons: non-transportation needs will continue to rise and the aforementioned ride-sharing and other “mobility” businesses.

The continued emergence of mobility-as-a-service (MaaS) providers will be among the most important and disruptive forces in the future, the study says. The MaaS industry is expected to purchase more than 10 million cars in the study’s key markets in 2040—compared to just 300,000 in 2017.

“Mobility service companies will be a prime driver of shifting car sales from personal to fleet economics,” said Tom De Vleesschauwer, transport and mobility practice leader, IHS Markit. “Ride hailing has the potential to be so disruptive because it is often the most convenient for consumers and can significantly increase access to car transport, particularly in markets with low car ownership rates.”

Despite this expected change, transportation won’t be unrecognizable in the future, Vleesschauwer notes. “… our analysis shows that there will be much that looks familiar, even in 2040. The majority of new cars sold and miles traveled will be in vehicles purchased for personal use. And a large share of those will have internal combustion engines that run on refined crude products. But the future of automotive transport will be an era defined by multidimensional competition. And the changes that future brings about will be profound and permanent.”