Just weeks after pulling the veil off the 2019 Corvette ZR1, the fastest and most powerful version of the Chevrolet sports car ever put into production, the bowtie brand is back, this time rolling back the ‘Vette’s top entirely.

At a special preview ahead of the opening of the Los Angeles Auto Show, Chevy gave a select crowd of journalists a sneak peek at the ZR1 ragtop, the first convertible version of the ultimate Corvette variant since the 1970 model-year. Like the Corvette ZR1 coupe that was revealed at the Dubai Motor Show, the drop-top will punch out 755 horsepower through its back wheels and hit 60 in less than three seconds.

“The new Corvette ZR1 convertible is a supercar in all respects,” proclaimed Mark Reuss, General Motors’ executive vice president in charge of global product development. “Few others can challenge the ZR1 convertible’s power and speed while offering the exhilaration of top-down motoring.”

Set to go on sale next spring, both versions of the 2019 Chevrolet Corvette ZR1 makes a big leap from the current top-performing version of the C7 line, the 650 hp Z06. The “King Kong Corvette’s” supercharged 6.2-liter LT5 V-8 churns out a solid 755 hp and 715 pound-feet of torque. 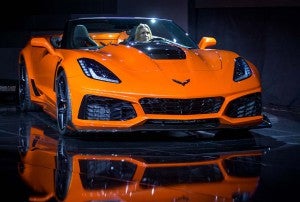 The new Corvette ZR1 convertible is the fastest 'Vette ever, expected to run 0-to-60 mph in less than 3 seconds.

(First Look: Chevy lifts veil off the Corvette ZR1 in Dubai. For the story, Click Here.)

The LT5 is an impressive and versatile piece of engineering, and Chevy had reason to be proud of what it delivered with the Z06, but it is seriously upping its game for the ZR1. Its 2.65-liter Eaton supercharger, for one thing, is 52% bigger than the blower box on the Z06. The eight-banger also gets a new dual direct/port injection system that both enhances performance and delivers a cleaner burn. These days, you can’t think about acceleration without worrying about fuel economy and emissions.

The big V-8, meanwhile, is paired with either a seven-speed manual gearbox or – for the first time on a ZR1 – an eight-speed automatic with paddle shifters. (The 10-speed in the Stingray and Z06 simply couldn’t fit.) 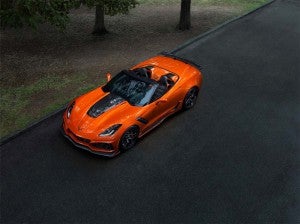 Putting out 755 horsepower and 715 foot-pounds of torque, the new ZR1 convertible is a supercar, Reuss said.

Chevy isn’t offering hard numbers for 0 to 60 times beyond hinting at sub-three second performance, while it is looking at running the quarter mile in the mid-10s.

“The ZR1 convertible is a no-compromise supercar,” said Executive Chief Engineer Tadge Juechter. “Thanks to the strong structure, the suspension tuning between coupe and convertible models is identical, meaning the ZR1 convertible offers the same benchmark performance, including a top speed of over 200 mph.”

Both versions of the ZR1 get a beefed-up version of the magnetic ride control system found on other C7 models. It relies on a continuously variable damping technology based on magnetorheological fluids, a system so precise and solid even Ferrari is now using it. 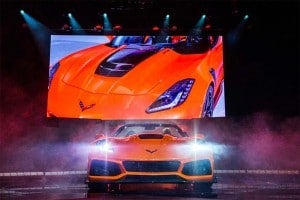 The new ZR1 ragtop will cover the quarter mile in the mid-10 second range.

Visually, you’re not going to have trouble telling the ZR1 apart from a Z06, never mind the base Stingray. There’s that massive new wing, for one thing. Make that “wings.” There’s a fair bit of customization a buyer can opt for, and in standard configuration the King Kong Corvette comes with a fixed low wing that increases downforce about 70% over the Z06 wing.

With the optional ZTK performance package you get a High Wing that that can be adjusted by up to 5 degrees for individual tracks. It generates a maximum 950 pounds of downforce. Both wings are tied to the ZR1 chassis, much like the C7.R race car, to ensure maximum stability. With or without the ZTK there’s a first-ever front underwing, as well. 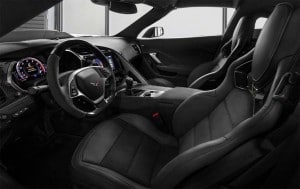 All that power means the driver needs some place comfortable to harness it.

Another quick giveaway you’re looking at the ZR1 is its carbon fiber hood. It stands proud because the engine is a full three inches taller than what’s powering the Z06. The nose of the ZR1, meanwhile, has been heavily redesigned to provide additional airflow for the engine and cooling systems.

Inside, the ZR1 also adds some more elegant touches to the familiar C7 cabin, including carbon fiber trim and either competition sports seats or Napa leather heated and cooled seats. For the track, there’s a Performance Data Recorder. There’s also a premium grade Bose audio package for savoring the moments when you’re just cruising down the highway.

(To see more about the rising popularity of convertibles, Click Here.)