Specialty models like i3, i8 will be phased out, head of brand reveals. 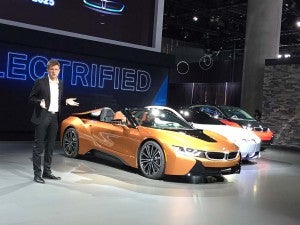 BMW mobility chief Klaus Froehlich with the new i8 Roadster, Next Vision concept and i3s.

BMW is using this week’s L.A. Auto Show to reveal its new i8 Roadster, the latest in a dedicated line-up of plug-based models that also includes the new i3s battery-electric city car.

But the debut marks something of a swan song for BMW i – at least in the form the brand was initially conceived. The original goal was to use it to market a line-up of specially designed plug-in hybrids and pure battery-electric, or BEV, models. But in a major shift reflecting the rapid evolution of battery technology, the head of BMW’s electric mobility program told TheDetroitBureau.com, those dedicated models will be “phased out.”

“For us, electrification is the new normal,” explained Klaus Froehlich, during a conversation at the Los Angeles Convention Center. Going forward, he continued, Going forward, “We will not do dedicated architectures. Instead “all fully-electric models will be (badged) BMW i.”

That would mean BEV versions of models like the 3-Series, the X5 or next-generation Z4. And it reflects the decision to design and engineer all future BMW products so that they all can be offered with a broad mix of powertrain technologies, including internal combustion, conventional hybrid, plug-in and pure battery-electric. 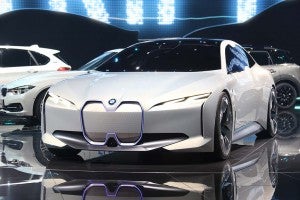 The BMW i Vision Dynamics Concept will make it to production, likely the last specialty model for the i brand.

That stands conventional industry wisdom on its head. Early on, a number of electric models did try to stuff batteries and motors into platforms designed for conventional gas or diesel engines. But that approach required significant compromise. Battery packs would eat up a chunk of passenger and cargo space and their weight would throw off a vehicle’s weight balance and center of gravity.

As a result, most manufacturers have been migrating to skateboard-like architectures in which the batteries are mounted within the load floor. That frees up space and lowers the center of gravity, enhancing road dynamics.

But several things have been happening that have shifted BMW’s thinking, Froehlich said, notably the rapid development in lithium-ion batteries. They have fallen in price from around $1,000 a kilowatt-hour at the beginning of the decade to somewhere below $200 today – and a new study by the Boston Consulting Group predicts they could drop to less than $70 within five years.

Meanwhile, Froehlich noted, the latest lithium batteries are significantly more energy dense – meaning more power in a given mass – which makes them easier to package.

And the new platforms that BMW is developing offers a lot more flexibility to accommodate different powertrains, whether gas or electric. With a BEV, said Froehlich, a different load floor can be welded in to accommodate batteries and other electrical and electronic components. The new platform will begin being used on new models launched after 2020. 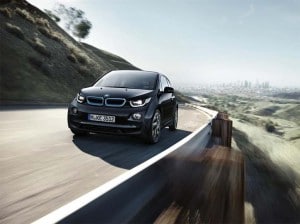 Going forward, BMW i will market all-electric versions of traditional models, like the i3.

Froehlich said it wasn’t entirely clear when the transition at BMW i will be competed. The Bavarian automaker still has one more model, a production version of the Vision Next concept, left to launch. But, he stressed, “They will disappear.”

But while future products won’t be quite as distinctive as the i3 city car or plug-in i8 sports car, they will be all-electric. And, Froehlich added, the sub-brand will serve as a platform for other future technologies, notably BMW’s first autonomous vehicles coming by mid-decade. The executive didn’t reveal what future plans his company has for using carbon fiber, the superlight material that was used for the bodies of the i3 and i8. But with smaller, more energy-dense batteries, he implied, weight is not quite as critical as it had been in the past when range was limited to less than 100 miles.

Going forward, BMW – like key rivals – sees 200 miles or more as the target for most of its products.

During the carmaker’s L.A. news conference BMW officials repeatedly stressed their intention to lead in the battery-electric space. And Froehlich took a not-so-subtle shot at battery-carmaker Tesla. “We do not just Twitter. We deliver on our promises,” he declared. While the exec insisted BMW “doesn’t comment on rivals,” it appeared to both reference Tesla CEO’s addiction to tweeting about future products, as well as the maker’s ongoing problems delivering its first mainstream BEV, the Model 3.