And For My Next Trick: Tesla’s Musk Suggests New Roadster May Be Able to Fly

Pushing the envelope or seeking a diversion amidst financial struggles.

What happens when the head of your car company also runs a rocket business? If that person happens to be CEO Elon Musk he hints that the new, $200,000 Roadster Tesla unveiled last week also may be able “to fly for short hops” if a buyer opts for a “special upgrade.”

Musk isn’t the only one who envisions flying cars. A number of firms are working on that concept, including European aerospace giant Airbus. But the Sunday tweet by the Tesla CEO adds another twist to the tale of a company that not only is building cars but batteries, stationary power systems and solar cells. Musk is also the boss at SpaceX, the rocket company that has been supplying the International Space Station and soon plans to start launching humans into space under contract for NASA.

Whether the latest tweet is serious is a question generating plenty of buzz across the Internet. While Musk’s many fans seem to believe he’s capable of just about anything, skeptics are asking whether the hint of a flying Tesla Roadster might be meant to divert attention away from the carmaker’s struggles – which include a disastrous third-quarter loss and ongoing problems getting the new Model 3 into volume production.

“Not saying the next gen Roadster special package *will* definitely enable it to fly short hops, but maybe,” Musk tweeted on Sunday, adding, “Certainly possible. Just a matter of safety. Rocket tech applied to a car opens up revolutionary possibilities.” 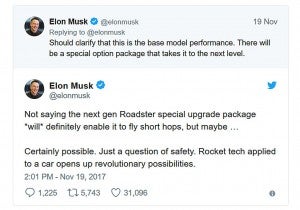 Tesla’s first commercial product was a two-seat Roadster, and it has been hinting a new version was under development. Nonetheless, it came as a major surprise when, during an event officially scheduled to reveal the new battery-powered Tesla Semi truck, Musk also unveiled the new Roadster, as well.

The specs announced last Thursday evening were impress, even for a down-to-earth vehicle, Tesla claiming the Roadster will hit 60 in just 1.9 seconds yet still manage over 600 miles range using a 250 kWh battery pack.

But a flying version? That has been a dream for more than a century, automotive pioneer Henry Ford funding development of a flying Model T until a friend, also the company’s lead test pilot, crashed. Lately, there has been a windstorm of interest in the concept, a number of companies working on new designs that could get off the ground in the next few years. They range from MIT spin-off Terrafugia to Toyota and even Airbus. Uber this month announced plans to begin testing its flying taxi service by 2020, with a goal of launching service in time for the 2028 Olympics in Los Angeles.

If anything, Musk seemed the skeptic when he participated in the TED Talks earlier this year, warning of flying cars that “they’ll be quite noisy,” and adding that if “there’s a whole bunch of flying cars going all over the place, that is not an anxiety-reducing situation.”

Has Musk really changed his mind? And, if so, how will the Roadster fly? Many of the new flying car and taxi concepts will make use of electric motors, rather than the traditional gas or kerosene fuels the aircraft industry has traditionally relied upon. With a 250 kWh lithium-ion battery pack the Roadster would have a lot of energy onboard. But the Musk tweet hints at “rocket tech,” which appears to point towards technology derived from SpaceX.

While it’s the stuff of sci-fi adventures, It’s hard to imagine bolting a set of rockets onto the new Roadster. And, for anyone who admires Tesla’s emphasis on emissions-free technology, rockets are not only energy hogs but can be rather dirty, depending upon what fuel is used.

Of course, the bigger question is whether Musk is serious about a flying Roadster. While it still boasts a stock price other automakers only can dream about, shares of TSLA shares are more than $60 off from their $389.61 record high of a few months ago. The stock collapsed after Tesla revealed a $2.92 per-share loss for the third quarter, compared with a consensus forecast of $2.45.

A number of analysts have turned bearish. Among the more consistent Teslas critics has been Efraim Levy, of CFRA Research. While the Semi and Roadster “are potential game-changers for TSLA,” he is advising investors, “first various financial, timing, and other questions must be resolved for the trucks and the Model 3.”

Former General Motors car czar and Vice Chairman Bob Lutz also weighed in during an appearance on CNBC Friday. Though a proponent of battery power – and credited with the concept behind the Chevrolet Volt plug-in hybrid – Lutz declared Tesla a “losing enterprise,” insisting that “at this rate they’ll never get to 2019.”

The Semi isn’t due out until that year, Tesla said last week, with the Roadster due to follow in 2020. For now, the big challenge the company faces is actually building the Model 3. The sedan did become the first Tesla product to go into production on time last July. But, since then, the company’s Fremont, California assembly plant has been facing what Musk has described as “production hell,” and is currently turning out barely 10% of the Model 3s Tesla had planned. Meanwhile, reports indicate many of those vehicles have significantly quality issues.

Tesla had hoped to boost total production to 500,000 next year, or about an eight-fold increase over 2018. But during an earnings conference call, Musk and other company officials acknowledged it will be well into the coming year before they can fully overcome the production mess. And Tesla is currently putting on hold the investments it still needs to make to get Model 3 up to full line speed.

While the carmaker claims to have more than 300,000 advance reservations in hand, if it can’t start filling orders and collecting sales revenues it very well could crash and burn before the Roadster can ever get off the ground.

(For a first look at the Tesla Semi, Click Here.)

4 responses to “And For My Next Trick: Tesla’s Musk Suggests New Roadster May Be Able to Fly”