Toyota is one of 200 companies potentially impacted by Kobe Steel's fraudulent practices; however, its U.S. built vehicle appear to be unaffected.

Toyota is just one of about 200 companies that used steel, aluminum and other metal products from Japan’s third-largest steel manufacturer, and that is raising serious concerns in the wake of revelations by Kobe Steel Ltd that it had falsified data on many of the products it sells for as long as a decade.

The news comes as the latest in a series of scandals and embarrassments for Japanese companies that long were seen as putting quality and safety above all else. The list includes Takata Corp., the Japanese supplier blamed for producing tens of millions of defective airbags linked to over a dozen deaths, as well as Mitsubishi Motors, which falsified mileage data. That carmaker was taken over last year by Nissan which is now embroiled in its own flap over safety testing.

Kobe has admitted fabricating data on metals and components used in aircraft, automobiles, high-speed railway stock and even rockets. In all, about 200 Japanese companies are impacted, including a number of vehicle manufacturers, as well as the Central Japan Railway, or JR Tokai.

(Toyota gives Century a new look for the next … century? To see it, Click Here.)

Toyota, Nissan and Honda, Japan’s three largest automakers, all have confirmed using Kobe Steel’s products for the hoods and doors of at least some of their Japanese-made vehicles. There has been no indication of whether Kobe products were used in vehicles sold abroad but it is common for components produced in Japan to be shipped to assembly plants in other parts of the world, even the United States. 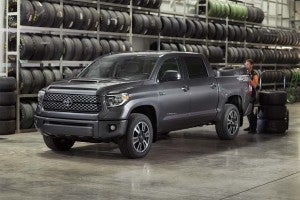 The new Toyota Tundra TRD won't be impacted by the Kobe Steel scandal.

Were those exterior sheet metal panels to be found to fall short of expectations that could affect the safety of vehicle owners and raise questions about crash test ratings, especially if it turns out that the fabricated data hid inconsistencies between various batches of the same grades of steel and other metals.

Smaller Japanese automaker Subaru said that it used Kobe Steel products not only for vehicles sold to retail customers but also in aircraft. And the Reuters news service quoted Japanese industry ministry officials who said some Subaru products sold to the military also used Kobe Steel.

The scandal could prove particularly worrisome for the aircraft industry. Some Kobe products were used in regional jets and rockets produced by Mitsubishi Heavy Industries. Mitsubishi also supplies some components for the Boeing 787 Dreamliner.

“Nothing in our review to date leads us to conclude that this issue presents a safety concern,” the company said Tuesday.

Boeing also could be impacted through another company, Japan’s IHI produces some engines for the U.S. aircraft giant and also uses some Kobe Steel products.

So far, there has been no indication whether Kobe Steel’s products have been used by any automotive suppliers. If so, the use of low-quality metals in components such as vehicle suspensions could raise additional safety concerns.