Officials have bene mulling possibilities and prefer spin off. 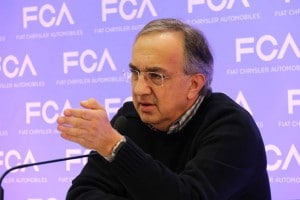 FCA CEO Sergio Marchionne is looking for ways to bring the company to profitability.

The multitude of possibilities lower debt and improve the company’s financial standing that Fiat Chrysler officials, led by CEO Sergio Marchionne, are considering appears to be have been whittled down to just one.

One preference anyway: a spinoff of Magneti Marelli, the company’s unit that produces lighting and electronics as well as suspension and exhaust components.

Marchionne told reporters over the weekend that a spinoff of Magneti Marelli would likely follow the pattern set by Ferrari. FCA initially listed a small stake in the sports car company on the market then later spun it off, with the remaining shares distributed to FCA’s existing shareholders.

“Or I could just spin it (off)” and distribute Magneti Marelli’s shares to FCA investors, Marchionne told journalists northern Italy, according to Reuters.

“We will press ahead with (a separation) in 2018, it will be part of the business plan we will present next year,” he added.

Marchionne has been using a series of five-year plans to get the company back on its financial feet, with the current plan calling for FCA to be a cash-positive enterprise by the end of 2018. The current plan has had Marchionne investigating a variety of paths to the black, including mergers with every maker from General Motors – which rebuffed his advance – to Volkswagen to even Apple.

China’s Great Wall Motors was rumored to be interested in either a merger with the automaker or in acquiring the company’s Jeep and Ram brands. The companies denied in a real interest in a deal. The most recent “suitor” was reportedly South Korean automaker, Hyundai.

A merger would have launched Hyundai into the position as the world’s leading automaker by sales based on the performance of the Korean auto company and the FCA, which sold a combined 11.5 million units last year, but nothing came of the dalliance.

(To see why analysts think FCA’s various assets could be sold, Click Here.)