Where Are the Diesels? You Have to Look Hard at Frankfurt Motor Show

They're still there...but you have to look for them. 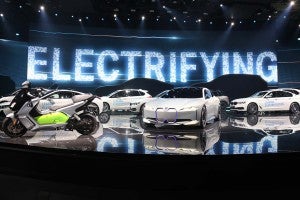 BMW's unveiling of its electrified vehicle line-up highlighted the lack of diesels at this year's Frankfurt Motor Show.

For most of the past two decades, the Frankfurt Motor Show might have been described as the Diesel Motor Show, manufacturers spending much of the biennial event’s press days talking about the virtues of what they heralded as “clean diesel.”

As this year’s Frankfurt media preview draws to a close, however, one couldn’t help but notice the lack of diesels on the floor of the sprawling convention complex. And, when a manufacturer did bring up the subject of diesels it was, as likely as not, in some form of an apology.

That’s largely the result of the ongoing scandal triggered by the revelation, almost exactly two years ago, that Volkswagen had crafted a way to cheat on emissions tests for 11 million diesel engines. Since then, other automakers have faced accusations, in both the U.S. and Europe, of using similar “defeat devices” to deceive regulators.

“Trust has been lost in the German automotive industry,” lamented Dieter Zetsche, CEO of Mercedes-Benz parent Daimler AG, during his opening remarks. “I regret this very much. We must (now) prove we are part of the solution.”

At the other end of the Frankfurt Messe convention complex, BMW officials were taking a similarly contrite approach as they launched into their own opening news conference. One of the country’s better-known political journalists was even invited to begin the event by grilling CEO Harald Krueger about some of BMW’s own legal issues, the executive insisting BMW had not intentionally broken any laws. 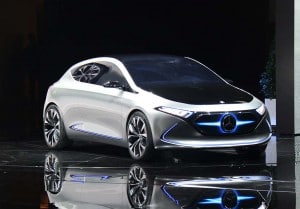 Mercedes' EQ A was one of many EVs that made debuts in Frankfurt as diesels were largely ignored.

A walk around the massive BMW exhibit revealed not a single diesel model on display, even though so-called “oil-burners” still account for roughly half of the company’s sales in Europe. Instead, BMW used its news conference, and its display, to focus on where it plans to head in the future, the company announcing it will have a hybrid, plug-in or full battery-electric version of essentially all of its models by the end of the next decades. At least 12 of those will be all electric.

“For us,” said Krueger, “the top priority is electromobility.”

That same message could be heard everywhere one turned at the 2017 Frankfurt Motor Show during its media preview. Indeed, Daimler not only outlined similar plans for its Mercedes-Benz brand but announced that by the end of the decade it will sell only pure battery-electric versions of its Smart brand vehicles in the U.S. and Europe, “with the rest of the world to follow,” said Zetsche. Volkswagen, meanwhile, said it would soon have 80 electrified models in its fleet, with the company planning to spend 20 billion Euros to develop them during the next five years.

For all of that, the diesel is not dead; certainly not yet, and especially not in Europe, where the high-mileage technology has accounted for about half of all new vehicle sales over the last decade. And despite the ongoing emissions scandal, sales have dipped only slightly. According to IHS Market, diesel’s share will dip from 49.7% before the VW scandal erupted to an estimated 46.9% this year.

Zetsche, for his part, made it clear Daimler’s Mercedes brand won’t abandon diesel – or gas engines, for that matter – in the near future. Along with electrified drivetrains, he explained, “We need all three types (of powertrain technology) to give drivers the kind of individual mobility they desire.” 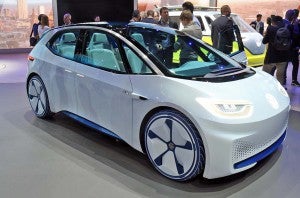 Perhaps no maker has worked harder to separate itself from diesel engines that Volkswagen. It rolled out its new EV concept, the I.D. Crozz in Frankfurt.

In Europe, in particular, affordability remains a big issue for motorists, particularly when it comes to fuel costs. In Frankfurt, a gallon of gas works out to around $6.00, even after the plunge in global petroleum prices, due largely to hefty taxes. Most European countries, including continue to incentive diesel fuel, however, helping offset the higher initial outlay for vehicles with diesel engines.

That reflects the fact that Europeans have been more focused on the reduction of global warming carbon dioxide emissions than in the U.S. Oil-burners produce notably less carbon dioxide per mile driven. But the VW scandal has highlighted the fact that unless equipped with elaborate – working – emissions controls, diesels produce far more smog-causing oxides of nitrogen, as well as particulates linked to lung cancer.

So, there has been a growing shift in support for the technology among European environmentalists and regulators. In Paris, for example, the city government has been floating the idea of banning diesel engines from entering the urban core. That is separate from the French government’s consideration of new rules that would ban the sale of all internal combustion vehicles entirely by 2030.

Such bans, and declining support for the technology means that diesel is likely to see its share of the European market drop to 32.5% by 2025, according to that IHS forecast.

Nonetheless, despite all the focus on all the battery-based vehicles coming to market over the next decade, there will remain plenty of diesels for European loyalists – three on the newly updated VW T-Roc SUV, for one example. And there’ll be similar choices on other VW models, such as the Golf and Passat. 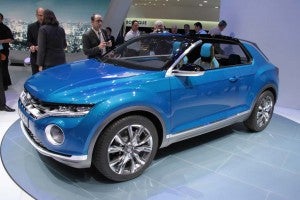 Not all diesels were pushed to the back of the show, VW's new T-Roc small crossover will offer a diesel powerplant.

Don’t go looking for them on VW’s U.S. models, however. The brand no longer plans to sell diesels in the States, even though they accounted for nearly a quarter of its total sales there before the scandal broke. Sister divisions Bentley and Audi will offer only limited diesel options.

Mercedes has, for now, pulled all of its diesel options out of the U.S., as well, though officials said they may yet return. BMW, meanwhile, has reduced its American offerings, though they are still available.

The U.S. never took to “clean” diesels the way Europeans did, in part, reflecting the bad old-time oil-burners that were briefly popular in the 1970s and 1980s following twin oil shocks. The technology had begun to catch on in recent years, as reflected by VW’s success.

Americans will still have some diesel alternatives. General Motors offers the technology on its Chevrolet Cruze sedan, for example. But cross-town rival Fiat Chrysler Automobiles is facing its own legal headaches, accused by the EPA of using its own defeat device on models like the Ram diesel pickup.

As in Europe, carmakers are shifting emphasis to electrified options in the U.S. And, so, while diesels will remain available for the time being, they are expected to steadily lose momentum in the coming years.