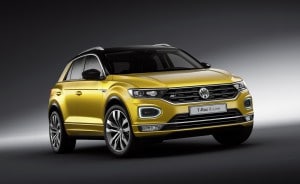 Volkswagen adds another much-needed utility vehicle to its line-up with the new T-Roc.

Volkswagen’s quest to be a bigger player in the U.S. market has fallen short due to a shortage of sport-ute and crossover offerings. The German maker’s been remedying that with a spate of new vehicles, such as the new Touareg, Atlas and now, the T-Roc.

The small crossover helps the company fill one of the fastest-growing niches in the American market. It will debut in Europe this fall with an American debut coming next year for less than $25,000 to start.

“The T-Roc sets a new benchmark in the booming SUV segment,” said Herbert Diess, chairman of the Board of Management for the Volkswagen brand continues. “With its functionality, dynamic handling and technology, the T-Roc embodies all good Volkswagen qualities and will further boost our SUV campaign.”

The T-Roc will be joined by a compact version called the T-Cross. While it’s important for VW to add more utility vehicle to its line-up, it’s not the vehicle that stands out as much as its unusual name, which was done for effect.

“The ‘T’ refers to the car’s successful frontrunners, the Tiguan and Touareg, whose SUV DNA and strengths have been transferred to the new model – the high seating position, the robust qualities of the body and running gear and the all-wheel drive system that is included as standard for the top engines,” said Frank Welsch, member of the Board of Management responsible for Development, in a statement.

“The ‘Roc’ in the name has been derived from the English ‘Rock’, which stands for the positioning of the T-Roc as a crossover that combines the dominance of an SUV with the agility of a compact hatchback model and the dynamism of the compact class.

“This car really rocks the segment – sometimes louder and sometimes more subdued, according to its specific options and color combination. A new Volkswagen which takes the brand and its owners into the next decade of mobility.”

While starting in Europe, the plan calls for the vehicle to spread to other markets. VW officials note that Nearly 80% of compact SUVs are currently being sold in Europe and China. This type of SUV is also gaining in importance in Brazil, India, Russia and the U.S. The automaker expected that during the next 10 years the annual global sales volume will grow from around 6.4 million units today to around 10.6 million units.

The new T-Roc isn’t exactly revolutionary in its exterior design. In fact, it borrows from the aforementioned Tiguan, which it sits immediately below in the portfolio. It brings authentic off-road elements into harmony with dynamism and urban style. The T-Prime Concept GTE presented in 2016 already offers a foretaste of another new SUV with this design DNA, according to VW.

Volkswagen describes the exterior styling as “confident and expressive,” which is code for “It looks enough like the Tiguan that you know it’s a VW, but it’s not a mini-me of the Tiguan.”

Its got a nice wide stance that indicates competency on the road, but a softer more refined gentle curve along the C-pillar conveys a bit luxury and panache. It’s a slick exterior package that will separate it from others in the segment while saying “I’m a Volkswagen.”

On the lower-most level are the exhaust pipe trims towards the sides – which come in chrome in the ‘Style’ and ‘Sport’ models – and a diffuser in the middle. However, you can’t have an SUV without having a decent engine as well as all-wheel drive. Well, the T-Roc comes with VW’s 4Motion as an option and it comes with six engine choices as well: three gas, three diesel.

The three gas engines put out just under 115 horsepower, 150 hp and 190 hp respectively. They are mated to six- and seven-speed transmissions. In conjunction with the 150-hp engines, buyers can choose front-wheel drive or all-wheel drive as well as an automatically shifting dual clutch gearbox (7-speed DSG). The 150-hp gas engine is equipped with Active Cylinder Management, which automatically deactivates two cylinders at highway speeds. The two 190-hp engines are equipped with 7-speed DSG and 4Motion as standard.