“Driving fun in its purest form.” 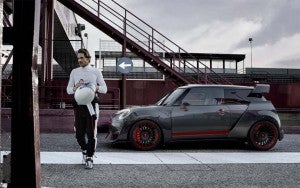 Mini is looking back to its racing history with its John Cooper Works GP Concept.

Exactly 50 years after scoring a major victory at the Monte Carlo Rally, Mini is offering a hint of its next big race effort with the unveiling of the John Cooper Works GP Concept set to debut at the Frankfurt Motor Show next week.

A good bit wider than the current Mini, with large front and rear aprons, side skirts and and a can’t-miss rear spoiler, the GP Concept also makes use of plenty of lightweight carbon fiber, the British maker explains, to enhance the three-door Mini’s go-kart-like manners.

“This is driving fun in its purest form,” said Peter Schwarzenbauer, the BMW AG board member who oversees the Mini brand. “The Mini John Cooper Works GP Concept is all about the unfettered feeling of driving and levels of performance found in motor sport competition.”

There’s no mistaking the GP Concept for your everyday Mini. Adding to the aerodynamic enhancements, the prototype coming to Frankfurt features large air intakes and molded front air deflectors. There are traditional Mini design cues, such as the elliptical headlights and hexagonal grille  — though it adopts a honeycomb design. The track-ready model also gets a powerdome and large hood air scoop.

(Mini set to unveil new EV in Frankfurt. For the story, Click Here.) 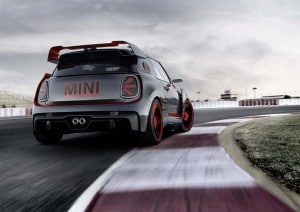 The front apron offers minimal clearance and the lightweight carbon-fiber matting is readily visible, though accented with a high-glass finish and red accents. Overall, the car is done up in a Black Jack Anthracite paint finish.

The overall look is designed to make it seem like the front end is being “suck(ed) down close to the ground,” Mini said in a release on the GP Concept.

The rear is equally tricked out, with numerous functional elements to channel air, including the prominent roof spoiler. LED taillights are meant to sharpen the focus of the back end. 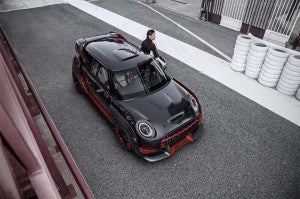 There’s a large-screen-format display and an emergency cut-off button along with traditional Mini switches.

The rally concept “brings together the full suite of defining Mini design elements and showcases them at their sportiest,” said Adrian van Hooydonk, senior VP of design for the BMW Group.

The Frankfurt concept is designed to celebrate Mini’s three Monte Carlo Rally wins, but also suggests there could be to the brand’s future in motorsports.

As the maker points out, the GP Concept “picks up the baton” from the 2012 Mini John Cooper Works GP and the kit rally model it introduced in 2006.

What specifically Mini has in mind – and what, if anything, it plans to do with the Mini John Cooper Works powertrain – we hope to find out in Frankfurt next week.