Alabama plant will build part of the battery-based family in future. 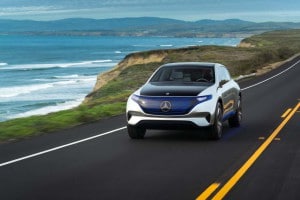 Mercedes will build its EQC, an SUV-style electric vehicle for the 2019 model year.

Mercedes-Benz isn’t ready just yet to say when it will bring out the EV version of a sport-utility vehicle under the EQ brand, which was first unveiled a year ago at the Paris Auto Show.

Markus Schaefer, member of the Divisional Board of Mercedes-Benz Cars, Production and Supply Chain, declined to tell reporters during a press conference at the Mercedes-Benz plant outside Tuscaloosa, when the plant would build its first electric vehicle.

Major automakers such as Mercedes-Benz, Volkswagen, BMW, Toyota, General Motors and Ford are all lining up to build new EVs, but the market outlook for the vehicles still remains uncertain despite pressure from national and local governments around the world, which are concerned about pollution from vehicles in major urban centers.

By 2022, Daimler AG plans to electrify the entire portfolio of Mercedes-Benz, offering customers at least one electrified alternative in all segments from smart to large SUVs. Overall, Mercedes-Benz is planning to offer more than 50 electrified vehicle variants. At the same time, Mercedes-Benz will be continuously supporting the development of plug-in hybrids and the introduction of 48-volt-systems, Schaefer said.

(Daimler AG investing $1B in Tuscaloosa plant to electrify SUVs. For the story, Click Here.)

The first EQ series model, EQC, will go into production in 2019 in Bremen, Germany. 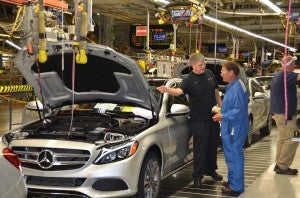 Daimler is investing $1 billion into its Tuscaloosa, Alabama, facility to ensure it can produce EVs and the batteries to run them.

However, the Tuscaloosa plant will be ready to start building pilot versions of next generation of Mercedes-Benz utility vehicles by December in preparation for a launch of the new models in 2018, Schaefer told employees during a “team” meeting where he officially announced Daimler AG’s plans to invest an additional $1 billion in the Tuscaloosa site.

The popularity of the SUVs built in Alabama has helped make Mercedes-Benz the top selling luxury vehicle in the world.

The new investment will create an additional 600 jobs at a new battery plant; a logistics center to expedite exports both finished vehicle and CKD kits as well as preparations for production of EQ branded vehicles in Alabama.

The preparations for launch of the new vehicles include the construction of a new, highly automated $1.3 billion body shop that includes more 1-million square feet of floor space, roughly 1,000 robots and more than 100 automatic guided vehicles that bring material to the work stations.

The new body shop by control center that is capable of collecting data from throughout the body shop and using to check continually the work in process, engineers in the control center said.

The data collection process, which Mercedes has dubbed “Industry 4.0” also can be used to spot faulty equipment before it fails and to predict which piece of equipment is likely to malfunction by analyzing information about vibrations and data in real-time.

The application of digital tools to manufacturing processes will lead to greater efficiency, engineers added. The expansion makes Tuscaloosa one of the “smartest” automotive plants in the world. MBUSI in Tuscaloosa currently builds the GLE, GLS and GLE Coupe utility vehicles that are exported to more than 80 countries worldwide as well as the C-Class sedan for markets in North America.

In 2016, the plant produced more than 310,000 vehicles and is expected to match the total again this year. MBUSI currently employs more than 3,700 team members and supports 7,000-plus jobs on the approximately 1,000-acre site.