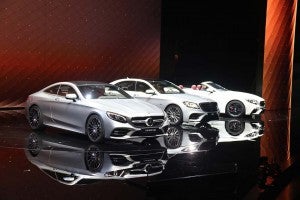 Mercedes took the covers off all three iterations of its new S-Class at the Frankfurt Motor Show.

Buyers looking for a premium luxury model will find Mercedes-Benz rolling out three new options at this year’s Frankfurt Motor Show, the German automaker now offering more versions of its big S-Class family than ever before.

The new-for-2018 variants include updates of the S-Class Coupe and Cabriolet models, as well as the new S 560e Plug-in Hybrid. It’s the first Mercedes offering to wear the new EQ badge, part of an entirely new line-up of electrified vehicles the company plans to roll out over the coming decade.

“By 2022, we will electrify the entire Mercedes line-up,” brand boss Dieter Zetsche promised during a news conference marking the opening of this year’s Frankfurt Motor Show. Some product lines will offer conventional hybrid options, others a plug-in, such as the S 560e. Still others will be available in pure battery-electric form, and some will offer buyers multiple electrified drivetrains.

The Mercedes-Benz S 560e is one of 10 plug-ins, or PHEVs, expected to be offered by the company by the end of this year. And the updated version will offer both greater range and more power than the previous plug-based S-Class, as well as all the new infotainment, safety and driver assistance technologies found in the rest of the S-Class line-up.

(Mercedes reveals S-Class coupe, cabriolet ahead of Frankfurt. For the story, Click Here.) 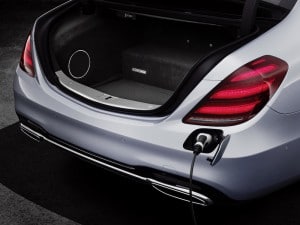 The third vehicle in the S-Class family is the S 560 e: a plug-in hybrid.

The S 560e combines a 367 horsepower turbocharged 3.0-liter V-6 with a 120 hp electric motor integrated into Mercedes’ familiar 9G-Tronic nine-speed automatic transmission. It draws power from an updated lithium-ion battery pack that is both smaller than in the prior S-Class PHEV and more energy dense. It now can store 13.5 kilowatt-hours of energy, enough, according to Mercedes, to run 50 kilometers, or about 31 miles, per charge – at least on the European test cycle.

That figure could drop by as much as a third under U.S. EPA testing. So could the 112 MPGe fuel economy number the German maker quoted in Frankfurt.

The smaller battery pack not only extends the range of the S 560e but also takes up less space, meaning buyers also get more luggage space.

A higher-power 7.2 kWh built-in charger, meanwhile, will speed up charging times. Mercedes did not reveal whether the S 560e will ultimately be offered with an optional inductive charging system it hopes to roll out next year. That would make it even easier to charge up, as drivers would simply roll across a special mat and not even bother to plug in.

Visually, the “EQ” badge could be one of the first things one spots checking out the 2018 plug-in hybrid. Exterior changes for all three of the new S-Class variants are modest. For the 2018 S-Class Coupe and Cabriolet models, revisions include new, cutting-edge OLED taillights unique to the two-door models. But, like the S-Class sedan and plug-in hybrid, the two-door variants now add a range of new infotainment, driver assistance and safety gear that will be shared with the refreshed S-Class sedan. 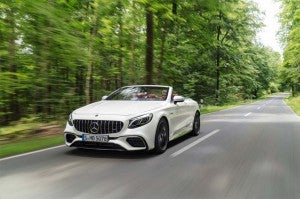 AMG versions of the 2018 S-Class Cabrio and Coupe models adopt the Panamericana grille.

The outgoing S-Class was a technical tour de force when it debuted just three years ago, introducing a range of features, including the ability to drive hands-free, albeit for short stretches of time on limited access highways. The new S-Class takes things a step further with a long list of new features that include: 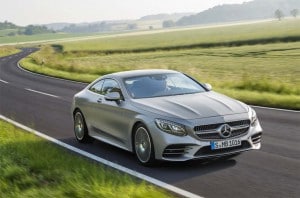 The 2018 Mercedes-Benz S-Class gets modest exterior changes but lots of new technology.

The S-Coupe now can be fitted with Mercedes’ Magic Body Control with curve tilting which, the maker explains, “reduces force and makes for a more comfortable ride for passengers. The innovative system recognizes bends with the help of a stereo camera behind the windscreen, and a lateral acceleration sensor of the ROAD SURFACE SCAN suspension.”

Meanwhile, the automaker claims that the new biturbo V-8 it will offer in the S560 Coupe and Cabriolet will be “one of the world’s most economical V-8 engines,” improving fuel efficiency over the old models by eight percent.

At the upper edge of performance, the S63 Coupe and Cabriolet will feature the handmade AMG 4.0-liter twin-turbo V-8 which will make 603 horsepower and launch from 0 to 60 in a factory-rated 3.4 seconds.

At the top of the S-Class range, the S65 two-door models will feature a 6.0-liter twin-turbo V-12 making 621 hp and 738 lb-ft of torque. All AMG models will adopt the new Mercedes Panamericana grille.