Ford Freshens Up Little EcoSport Ahead of U.S. Arrival 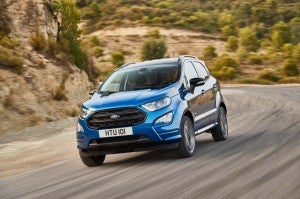 For the 2018 model year, Ford's smallest SUV, the EcoSport, gets a facelift just in time for its U.S. debut.

Already a solid performer in the European market, Ford is giving a subtle facelift to the pint-sized EcoSport SUV ahead of its American arrival next year.

The smallest ute in the Detroit automaker’s line-up began life in Brazil back in 2003 and is beginning a global rollout that marks the worldwide surge in demand for small SUVs. The version Americans will start to see in showrooms a year from now is set to become the first Indian-made vehicle exported to the U.S.

The updated Ford EcoSport debuting at the Frankfurt Motor Show adopts a more modern face, and nicer interior, adds a new diesel package and its first all-wheel-drive option, while also beefing up its technology with, among other things, the addition of the latest Sync 3 infotainment system.

Based on the same architecture as the subcompact Fiesta, EcoSport is riding a global surge in small SUVs. And that could prove especially important once it arrives in the U.S. market where demand for traditional, small passenger cars has all but dried up – while sales of small utes is on a fast rise. 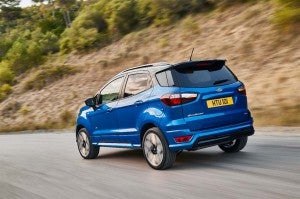 The EcoSport nameplate first appeared in 2002 as a 2003 model in Brazil. It is now produced in factories in Thailand and Russia, as well as India. The second-generation crossover-ute debuted as a 2013 model, so what’s coming to Frankfurt is a mid-cycle refresh.

For those familiar with the EcoSport, the update adopts a large version of the distinctive Ford trapezoid grille that first appeared on the Fusion sedan. It’s framed by new headlights and the prerequisite LED daytime running lamps. More subtle changes elsewhere include revised side sills and a few tweaks to the back end.

A sporty EcoSport ST model is in the works and will get more aggressive features including unique bumpers and side skirts, as well as 17-inch wheels.

The cabin has also been updated, Ford striving for better ergonomics and improved storage. The most immediate change here is the addition of a “floating” design for the car’s touchscreen options, the largest an 8-inch display that controls the latest Sync 3 infotainment system. 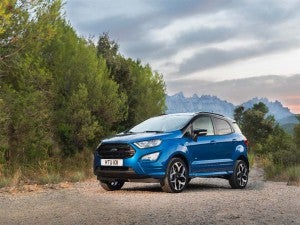 The new EcoSport comes to the U.S. next year. It will be built in India.

Under the hood, the European version of the EcoSport will be offered with three different turbocharged gas engines ranging from 99 to 138 horsepower, as well as a new 1.5-liter diesel making 123 hp. Set to join the line-up in 2018, it will be paired with a new six-speed manual and come with all-wheel-drive, the first time that option has been available on the EcoSport.

We can expect to see the exterior and interior updates, as well as the new tech touches, carry over to the Ford EcoSport set to come to the U.S. next year. We’ll have to wait a little closer to launch to see what sort of options Ford will offer under the hood for American drivers.

The launch of the EcoSport will mark an industry milestone. Several local manufacturers have tried unsuccessfully to crack the U.S. market, so the EcoSport will become the first Indian-made model to make it to the States.

The question is how that will play out under a Trump Administration that has been pressing automakers to bring jobs to the U.S. Ford took plenty of heat from then-candidate Donald Trump for announcing its intent to move its small car production to Mexico. It ultimately killed plans for a second factory South of the Border. But instead of returning Focus production to the States, it is now expected to move to China.

(Ford scales down with new EcoSport SUV. Click Here for the story.)

As for EcoSport’s cousin, the Fiesta, it is widely expected to be dropped from the U.S. market as a result of declining sales.