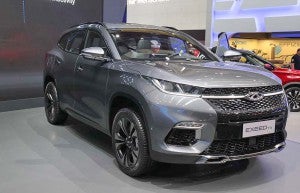 Chery is hoping its Exeed might lead it to be the first Chinese maker to find success outside of China.

China is now the world’s largest automotive market yet, on a global scale, domestic Chinese manufacturers are insignificant players. They’ve nudged into Brazil and a few other third-world markets, but they are all but invisible in Europe and entirely absent from the U.S.

But that could soon change. After years of touting plans, several Chinese automakers are making critical breakout moves, as Chery is demonstrating at this week’s Frankfurt Motor Show. There it has rolled out two models that it hopes will anchor its global push.

They include the Tiggo Coupe and Exeed TX SUV. The coupe crossover is meant to suggest that the state-owned manufacturer can stand up to the best European manufacturers when it comes to pushing the design envelope. Though clearly more conventional, the Exeed shows what Chery is ready to deliver Europeans right now.

Until recently, China’s domestic automakers didn’t even have much to brag about in their home market which has long been dominated by foreign brands, such as Volkswagen, General Motors and Ford. The products they occasionally brought to international shows, like those in Frankfurt and Detroit, tended to feature stodgy design and dated technology. Quality problems were readily apparent.

(China’s Chery set for big introduction in Frankfurt. For the story, Click Here.) 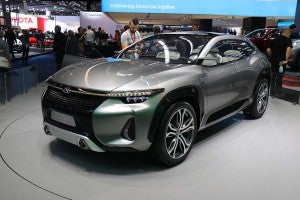 Chery's Tiggo coupe concept at the Frankfurt Motor Show reveals what Chinese makers may be capable of in the future.

But things have begun to change, in part because Chinese laws require those foreign manufacturers to partner with domestic companies in order to build in China. That has led to a massive transfer of technical and manufacturing know-how and put lots of money in the pockets of companies like Chery.

The little maker first gained some notoriety in a David v Goliath battle with General Motors, marketing a minicar, the QQ, that was essentially a clone of a Chevrolet. Chery was ultimately forced to pull it from the market but it helped raise enough cash to help the Chinese company begin developing more unique and competitive products of its own,

Today, Chery is one of China’s most successful homegrown carmakers and it is intent on globalizing, Europe the target as it reaches out for first-world markets.

The Exeed is expected to be its first offering for Europe and will anchor a broader mix of SUVs and other models. It features a wide grille that somewhat echoes the look of the now-familiar Lexus spindle grille design. A single chrome part cuts across the other part of the grille, linking two thin slit LED headlamps that flow into the car’s front fenders. Subtle bulges to the rear fenders, topped by sharp sheet metal creases, give the Chery Exeed a muscular and reasonably well-planted appearance.

By comparison, the Tiggo is much more aggressive looking and lifts from common themes in current concept vehicle tends, notably the suicide-style rear doors and center-pillarless design that offers wide access to the car’s interior.

While there are no production plans for Tiggo, the Exceed is already in Chery’s Chinese showrooms. As for Europe, “We will be on sale in a matter of years with this car but I wouldn’t like to put a timeframe on it,” Chery R&D boss Ray Bierzynski told reporters in Frankfurt. 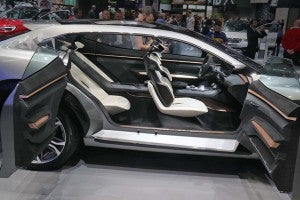 The interior of the Chery Tiggo coupe concept, which the company hopes will help it find sales success in Europe and perhaps the U.S.

How it will be received by European consumers is far from certain. Even major Japanese manufacturers such as Toyota and Nissan have had a far tougher time grabbing market share than they have in the U.S., reflecting the European tradition of supporting local manufacturers. While its less common today for Germans, French and Italians to stick with their individual national brands, they’re far less receptive to European outsiders.

And, experts caution, Chinese makers will face the particularly tough challenge of proving they can build vehicles that are not only stylish and well-equipped but also able to deliver the quality picky Europeans demand. It has tapped Westerner James Hope to help it better understand European and American tastes in styling.

Chery now has four plants at home capable of producing up to 1 million vehicles annually. As the once torrid pace of growth in China slows, that’s about 40% more than the carmaker needed last year. So, it really could use new markets abroad. But exports accounted for just 100,000 of the 700,000 vehicles it sold in 2016.

Of all Chinese makers, Chery is considered by many to have perhaps the best shot at breaking through. And it is looking at other ways to increase its appeal. While the Exceed is conventionally powered, expect to see a mix of gas, hybrid, plug-in and pure battery-electric offerings from Chery in the near future.

And if it can conquer Europe? Chinese makers continue to lay out plans to tackle the U.S. market, as well. That could happen soon, according to veteran Chinese auto analyst Mike Dunne. And domestic makers can thank those foreign brands for opening the doors. Volvo is now selling a stretch version of its S90 sedan imported from China. Buick is offering a Chinese-made SUV. And after originally planning to shift production of its Focus model to Mexico, Ford early this year said it will build that line in China, instead.

After more than a decade of laying out plans, Chinese cars are finally starting to arrive in the West.