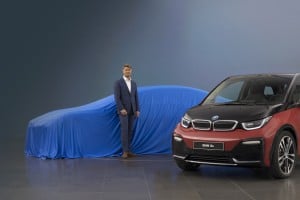 Harald Krüger, Chairman of the Board of Management BMW AG, said the company would produce 12 electric vehicles by 2025.

BMW announced it plans to significantly expand its electric vehicle offerings within three years and ultimately offer EV powertrains for every model in its line-up. The move mirrors similar announcements made by other European automakers in recent months.

Ongoing issues with diesel engines, the rise of viable electric alternatives (i.e. Tesla) and moves by several European cities to outlaw vehicles powered by gas or diesel engines have BMW as well as Mercedes-Benz, Audi, Volvo and others looking to make the move.

The plan, which was revealed today by Harald Krüger, chairman of the Board of Management BMW AG, calls for the company begin producing EVs in large numbers by 2020 and to have 12 different models in place by 2025 with ranges exceeding 400 miles.

Krüger didn’t even get the stage to himself, as Jaguar Land Rover also announced it will adopt an all-electric strategy starting in 2020. That strategy kicks off late next year with the roll-out of the fully electric Jaguar I-Pace SUV.

He also announced the automaker would introduce a new four-door electric model during the show that would settle in between the i3 and i8. BMW produces just the two battery-electrics right now, but has heavily relied on diesel power to help with mileage demands and performance expected by European drivers. However, with the new consumer and governmental trends afoot, a new era is being ushered in. 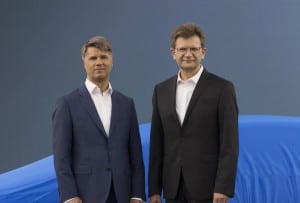 Harald Krüger, chairman of BMW AG, and Klaus Fröhlich, board member for Development, talked about BMW's plans ahead of the Frankfurt Motor Show.

It’s not just BMW making the change, but all of the brands under the BMW Group umbrella: Mini, Rolls-Royce and BMW’s M series too, Krüger said. It appears that the Mini EV concept coming to the Frankfurt Motor Show next week will definitely have a place in the brand’s line-up as the BMW Group looks to spread out the costs of its battery-electric technology across as many lines as possible.

“We are successfully transferring BMW i’s technologies to our core models,” Krüger said during the company’s preview of the Frankfurt Motor Show.

“And today, we are very proud to offer customers the broadest range of electrified premium cars worldwide. This fall, we will have 10 electrified vehicles available: nine electrified cars and our fully-electric C evolution.”

The company’s first BMW core model to be introduced as a BEV will be the X3 in 2020. All electric BMW’s will be consider members of its “i vehicle” line-up, including the aforementioned X3. The company’s BMW iNEXT offering will be ready for 2021.

Ensuring the group’s vehicles future line-up will all have electric-only options will be important as the cities banning gas and diesel engines are being supported their country’s governments. Both France and Great Britain have said internal combustion engines will be banned by 2040. Europe could become a 100% pure battery electric vehicle market by 2035, according to analysts at ING.

BMW’s move to BEVs – as well as other makers – is well timed as battery costs are coming down quickly. They’re still significantly more expensive than gas and diesel engines, but capacity investments into the battery sector may bring the costs down. In fact, Barclays analysts note there may be a “tipping point” when they reach parity between 2020 and 2030, according to Reuters.

“Modern society needs mobility,” Krüger said. “For many people, a car is a vital component of their everyday lives. We take our responsibility to society, our customers, our employees, and the environment seriously. That is why we are working hard and fast on the shift towards sustainable mobility.”