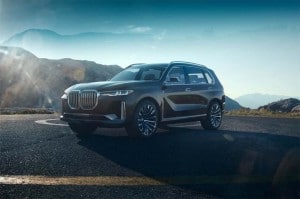 The BMW Concept X7 shares the same CLAR architecture as the current 7-Series.

Full-size luxury cars like the 7-Series may still provide the halo that helps define brands like BMW, but sales have been steadily dwindling in recent years, in large part due to the broader shift from passenger cars to light trucks.

That’s one reason why we saw Audi unveil the Q8 concept at the North American International Auto Show in Detroit last January. And as we prepare for the big Frankfurt Motor Show next week, BMW is ready to follow suit with its Concept X7 iPerformance model.

While officially being referred to as a “show car,” few observers doubt that what the Bavarian automaker has already begun teasing will soon join the BMW line-up as a counterpoint to both the 7-Series sedan, and the new 8-Series coupe. 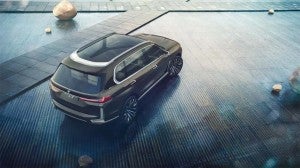 The BMW Concept X7 uses a plug-in hybrid, but a wide range of powertrains will be offered in production.

Visually, the Concept X7 is more than just an oversized version of the current X5. And it’s definitely not just a tall 7-Series – though they will both share the same CLAR architecture. The nose and, especially, the grille, is tall and blunt, with an oversized take on the classic twin-kidney BMW grille, with long, slit-like headlamps that flow into the front fenders. Might these be LED headlamps, akin to what is now offered on the European i8? We’ll hope to get an answer in Frankfurt next week.

Large air intakes are framed by chromed pillars and they appear to feed the car’s Air Curtains. These are meant to reduce turbulence around the front tires, air exiting from chromed slits behind the wheel wells.

Those chromed slits merge into the accents that extend the length of the rockers and sills, then pick up again behind the rear wheels. Another long chrome strip flows across the entire back end. There vertical accents give the X7 a sense of commanding height. Those wheels, incidentally, measure 23 inches, further enhancing the concept’s formidable presences. 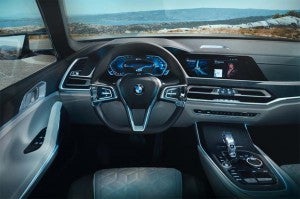 The Swarovski crytals aren't likely to make it into the production BMW X7.

Peer down on the X7 and you realize the roof is almost entirely glass. It gives you a first glimpse of the show car’s elegantly trimmed-out, three-row interior. It’s fitted with six seats made entirely for adults. There’s no sense of a “penalty box” back row. To further enhance the cabin’s roominess, the seats use a thinner design but are trimmed out just as lavishly as today’s 7-Series.

There’s plenty of chrome trim, along with wood and hand-stitched leather, in the cabin, even some Swarovski crystals in the center console. The wide air vents contrast the tall elements of the exterior design, however, and enhance the Concept X7’s sense of openness, with little to obstruct visibility. The gauge cluster is, of course, fully digital and there’s a large display above the center stack controlled by a traditional BMW iDrive knob.

The advanced look at the Concept X7 comes as the maker’s Chairman Harald Krueger reveals plans to add at least 12 fully electric models to the BMW line-up by 2025. So, as one might expect, the Concept X7 uses an electrified drivetrain. Again, we’ll have to wait for specifics, but it appears to be a plug-in hybrid using a new electrified turbocharger system. 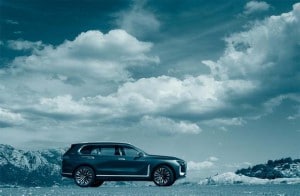 With the growing shift to SUVs, the production BMW X7 could readily outsell the 7-Series sedan.

In production, we’d be surprised if we don’t see some form of electrification, but the BMW X7 will also offer a range of other powertrain options, including 6- and 8-cylinder gas and diesel packages.

Some of the more extreme elements of the design, meanwhile, will likely be toned down. The tires are likely to be a bit smaller, for one thing.

But you can expect to see the X7 roll out of the BMW plant in Spartanburg, South Carolina, a facility dedicated to SAV production, about a year from now and marked as a 2019 model.