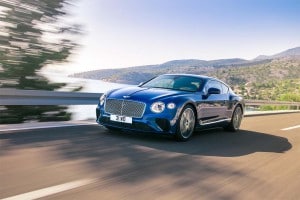 Bentley is unveiling its third-generation Continental GT at the Frankfurt Motor Show.

Luxury maker Bentley often describes its Continental GT as the heart of its line-up, if so, the updated 2018 version basically equates to a heart transplant.

The third-generation GT — it debuted in 2003 — will make its debut at the Frankfurt Motor Show next week. The latest iteration expands on the grand touring model’s history of luxury, technology and performance.

“The new, third-generation Continental GT is the pinnacle of our design and engineering achievements and marks the next step in Bentley’s journey,” Wolfgang Dürheimer, Bentley Motors chairman and CEO, said in a statement. 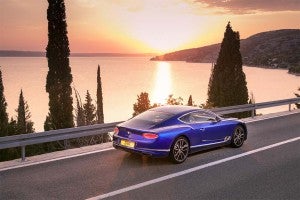 The new GT features a 6.0-liter W12 engine putting out 626 horsepower and 664 foot-pounds of torque.

(Bentley ready to plug in with Speed 6e Concept. Click Here for the story.)

“We are the world leader in luxury mobility and our products and services define new luxury in the automotive world. The new Continental GT encapsulates our desire to innovate as well as celebrate our heritage and take the Bentley ownership experience to the next, unparalleled level,” Dürheimer added.

Also, it will handle better due to the new W12 engine being 24% shorter than its predecessor helping with weight distribution on the car.

The speed increase is possible for a few reasons, one of them being a new 9-speed transmission with quicker shifts. Additionally, the company cut 176 pounds from the new model despite cramming more tech into the already gadget-laden GT. 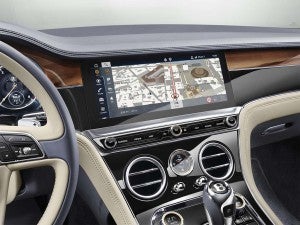 The new 12.3-inch center console on the Continental GT is the home of the vehicle's infotainment functions.

Some of that technology helps make it a more efficient vehicle, shutting down half the cylinders when max power isn’t necessary. This cuts fuel consumption and lowers vehicle emissions. The company plans to offer a plug-in hybrid version of the Continental for more eco-friendly owners. This will also help Bentley adapt to ever-toughening emissions regulations around the world.

Of course, technology that caters to the occupants is a must. Much of the new GT’s focus centers on a new 12.3-inch display that rotates into view when the engine start button is pressed. That’s supplemented by providing the driver with a massive screen behind the steering wheel, showing the usual instrument cluster, navigation and other information.

However, if your tastes are bit more traditional, you can rotate the three-sided panel where the screen is to feature three small analog gauges: a compass, a thermometer and a clock. The more “traditional” look of the Continental isn’t limited to those three gauges. 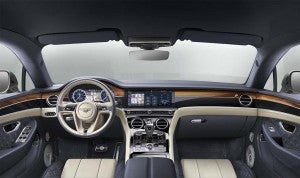 With more than 100 square feet of sustainable wood and plenty of leather, the GT remains true to its roots.

Long-time aficionados accustomed to the comfort of being bathed in leather and wood will not be disappointed. With more than 100 square-feet of sustainably-sourced wood, 20-way adjustable leather seats with heating, cooling, and massage functions, and a “diamond in diamond” quilt stitching effect, Bentley made certain that the “ultra” was still in ultra-luxury so often attached to the brand.

(Bentley unveils fastest model ever. Click Here for the story.)

The new model will roll out at the show and pricing will likely be revealed then; however, if you’re pulling out your checkbook now, expect to put six numbers in front of the decimal point — and the first number won’t be a “1.”