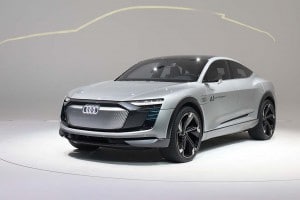 The Audi Elaine debuted at the Frankfurt Motor Show, The Level 4 autonomous concept is part of Audi AI, a family of technology advanced vehicles.

Audi’s two concepts – the Elaine and Aicon – in Frankfurt reveal the German automaker’s plans to not only electrify its vehicle line-up, but also to ensure they’re autonomous as well.

Each of the two features AI in their names, representing the maker’s new group of automated vehicles. The Audi AI family will feature a variety of innovative systems that relieve strain on drivers and offer new possibilities to use the time spent in the car.

Audi will accomplish this using strategies and technologies from the field of artificial intelligence and machine learning, hence the reference to AI. The Elaine and the Aicon are the first two concepts for this new family.

The Audi Elaine is an electric-powered SUV coupe that in a few short years will make highly automated driving possible – at times even without a driver on board. The driver parks the Audi in a designated area – the “handover zone” – and exits the vehicle.

From there, the car drives automatically and unoccupied into a multistory parking garage offering a variety of services, such as a car wash, a package station, a gas station or a charging post. Thanks to Audi AI, the car does all of this itself. 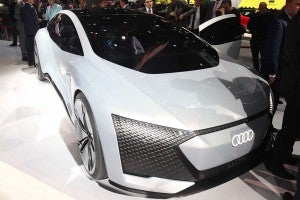 The Audi Aicon is the German automaker's look at the future of autonomous vehicles. It caters to the needs of the driver while ensuring a safe and efficient trip.

With the four-door design vision Audi Aicon, the brand with the four rings is presenting a autonomous Audi of the future – with no steering wheel or pedals. As a design concept, the four-door 2+2 boldly leaps ahead to show the exterior and interior design of the next decades.

(Audi cutting $12B from budget to accelerate electrification plans. Click Here for the story.)

The technology demonstrator combines innovations relating to the drivetrain, suspension, digitalization and sustainability in a visionary manner. The Aicon, too, is designed for purely electric operation and should be able to cover distances of nearly 500 miles on a single charge.

The Elaine and the Aicon feature just some of the abilities that Audi’s AI vehicles will demonstrate in the future. Ideally, these future models will be adaptable to their environment. According to Audi, AI cars will process large amounts of data acquired while underway by the assistance systems faster than ever.

It can synchronize and share these data with other road users nearly in real time. With Audi AI, the fully networked car can look roughly 10 seconds into the future – farther than the systems used previously. In short: The car of the future will for the first time be able to make prognoses, the company says.

The Elaine is essentially a Level 4 autonomous vehicle. It benefits from a new advanced zFAS controller installed in the rear of the vehicle. The new generation processor has more computing power and refined sensors with even greater range and precision. The Elaine can become a highway pilot, relieving the burden on the driver over extended distances.

When the highway pilot is active, the Elaine changes lanes automatically. It can pass a slower moving vehicle and then return to the original lane. Assistance for the driver continues after leaving the highway too. All of the usual driver assistance systems are on board, including the pre-sense safety technologies and the predictive efficiency assistant, which can be provided with even more precise route details from the HERE navigation data. 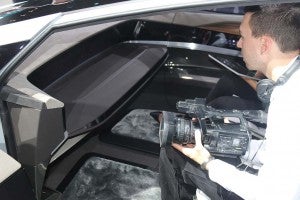 The Audi Aicon allows the driver to completely turn over steering and navigation to the car, allowing the driver to do other things while traveling.

While the Elaine is AI here and now, the Aicon is a glimpse into the future, starting with the design which is focused on presenting the driver and passengers with as many options as possible while traveling.

Large glass surfaces at the front and rear as well as the significantly convex side windows create a bright expanse of space for the travelers. A distinct edge runs as a hard line along the side window surfaces of the Aicon back to the D-pillar – a first in automotive design.

This line emphasizes the car’s length and effectively reduces the apparent volume of the cabin relative to the overall body. The darkened side sills rise subtly toward the rear, making it seem like the car is ducking.

The Aicon features suicide door, but no B-pillar. The entire interior cabin is exposed to the passengers as they get in the car, Audi notes. A 2+2-seater, Aicon has an upholstered, two-seat bench is integrated into the rear panel. The two front seats are designed for maximum comfort and optimal spaciousness. Passengers can slide them up to 500 millimeters (19.7 in) back and forth between the forward and rear positions.

Ultimately, the Aicon will feature a mix of advanced technologies and design aimed at giving passengers the most flexibility possible as they travel. It’s an “all-arounder” offering a maximum of comfort, communications technology and freedom for its occupants during a long journey. It combines the scopes for autonomous driving in an urban environment and on the highway with an unprecedented range for an electric drive.