Dream Cruise Muscles Up on the Fun Factor

Not everything rolling down Woodward Avenue is classic car. 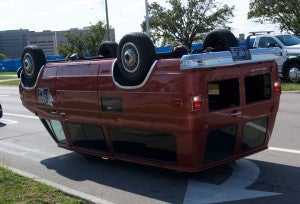 Not a fresh accident on Woodward, but an upside down van driving backwards looking to do yard work. (Photo credit: Brendan Strong)

The cruise, which features America’s classic muscle cars — and future classics — rumbling up and down Woodward Avenue, which is one of metro Detroit’s primary thoroughfares, for all the enjoy.

However, what appears to qualify as a “classic muscle car” is different from person to person. And while that may ruffle the feathers of a few purists, most don’t seem to mind too much taking it all in stride.

However, one thing is clear, the “non-qualifiers” often have a brilliant sense of fun. Spending a few hours chugging along Woodward yesterday gave Dream Cruisers a chance to see that on display in spades.

Scooby checks out the cruisers from The Mystery Machine during the 2017 Dream Cruise. (Photo credit: Brendan Strong)

(Dream On! Woodward Dream Cruise brings back memories. Click Here for the story.)

While there were no less than three DeLoreans making the loop, gull wing doors open, looking like stainless-steel condors. Perhaps most importantly, at least one did manage to have Doc Brown behind the wheel as it was converted to look just like the time machine in “Back to The Future.” For the uninitiated, he’s the guy with the huge that built the time machine out of the DeLorean.

Perhaps the wackiest vehicle on the road was a mid-’80s Chevy cargo van that looks like it flipped upside down, but upon further inspection – meaning as it cruised on by upside down and backward – it immediately drew jaw-dropping stares and then laughter.

If you're at the Dream Cruise and you see the General Lee that means the Duke boys are around ...

“That’s one of the funniest things I’ve seen in a long time,” said Ken Schmidt from Peoria, Illinois. It was his first Dream Cruise and “it’s stuff like that really makes it enjoyable. I love all the American muscle, but the idea behind these cars is that they were fun, and that upside-down van just kind of makes that point.”

Rarely did it take too long to find other examples of hard work all completed in the name of frivolity and humor.

... Boss Hogg won't be far behind to accuse them of something illegal! (Photo credit: Brendan Strong)

Scooby Doo could be seen hanging out of The Mystery Machine, a giant almost Mad Max looking heavy duty truck used two ferris wheel seats as its rear seating so you can catch a ride in a ride, and even The General Lee of “The Dukes of Hazard” fame hit Woodward with Boss Hogg’s white convertible Cadillac festooned with horns from a longhorn bull not far behind.

In short, the event is supposed to be fun, and it could be found everywhere in large and small ways. A rat rod complete with the weathered paint and oxidized sheet metal featured the “original” signage on the door: Motor City Auto Spa and it’s paint protection solutions. A solution clearly never used on that car. 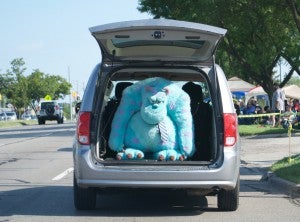 James P. Sullivan, or Sully as he's known to his friends at Monsters Inc. clearly knows how to have fun at the Dream Cruise. (Photo credit: Brendan Strong)

(Daimler offers a hint of its ultra-luxurious future with the Mercedes-Maybach Vision 6 Cabriolet. Click Here to check it out.)

The fun wasn’t limited to just modifiers of metal. Hordes of folks lined each side of the street – and where it was legal, the median – to enjoy the spectacle of rumbling engines, burnouts and amazing paint jobs. Heck, even James P. Sullivan showed up to take it all in.