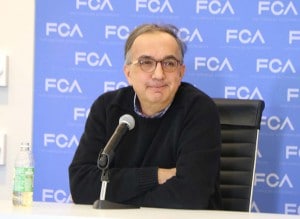 CEO Sergio Marchionne is open to all options whether that means selling the company, partnering with another automaker or lopping off brands.

Executives at Fiat Chrysler Automobiles N.V. continued to keep a low profile amid speculation that the automaker was considering a strategy that would lead to the spinoff or partial spinoff or even outright sale of key assets such as Maserati, Alfa Romeo and Jeep.

But Great Wall, which has disclosed it was interested Jeep, also said in a filing to the Shanghai stock exchange there are “big uncertainties” whether it will continue to study Fiat Chrysler. The Chinese company’s efforts have “not generated concrete progress as of now,” the filing noted.

Great Wall is China’s largest maker of sport utility vehicles and a very logical suitor for Jeep, which is one of the industry’s most iconic brands.

Meanwhile, reports also surfaced that FCA was contemplating a spinoff of Maserati. The website Seeking Alpha noted analysts at Jefferies wrote in a note to investors that consolidation “is a positive for auto investors and future capital allocation as industry change accelerates.”

The hardest nut to crack may be the voting control in FCA held by Exor, a Netherlands-based holding company of the Agnelli family, original founders of Fiat.

The report, however, suggested that the current generation of the Agnelli family has concluded that it is time to exit the mass market end of the automobile business. After Jeep, Maserati and Alfa Romeo are considered the most valuable pieces of FCA’s vehicle business.

Under this scenario Exor would wind up with a controlling interest in Ferrari, which was spun off in January 2016.

Even if Alfa Romeo was included in a spinoff of Maserati, the remaining company would be tiny by automotive-industry standards and lack the scale, which is considered vital in making workable contracts with suppliers.

(Click Here for more about Great Wall’s interest in Jeep.)

Nevertheless, automakers like FCA, General Motors and Ford Motor Co. have come under enormous pressure, particularly from analysts, to raise their stock prices even as sales of new vehicles begin to sink. Sales are expected to sink again in 2018 and retreat again in 2019, according to analysts.

Analysts also have noted that Tesla, the electric vehicle start up that is barely a decade old, is worth – on paper at least – almost as much as General Motors. The run up in Tesla’s stock also appears to have prompted the Agnelli family to consider its various options.

In addition to FCA’s various automotive brands aren’t the only parts of the company on the block. The company’s Magneti Marelli unit has long been speculated to be up for sale. There was a rumored $3 billion deal with Samsung last year that failed to come to fruition.

Selling off Magneti, which manufactures lighting, in-car infotainment and telematics products, would go a long way toward helping FCA pay off its remaining debt.

FCA officials have declined to comment publicly, but FCA CEO Sergio Marchionne has now twice postponed the dedication of a key FCA plant outside Chicago in Belvidere, Illinois, without explanation. An FCA spokeswoman declined to answer questions about the decision to postpone the ceremony scheduled for today.