General Motors and Volkswagen dominate this year’s first cut as members of the North American Car, Truck and Utility Vehicle of the Year jury get down to comparing the dozens of new models coming to market through the end of 2017.

But while Detroit’s Big Three have a strong representation, overall, in the three categories jurors will consider, the big surprise is that there’s not a single piece of Motown sheet metal in the passenger car category. Asian and European manufacturers will have to shoot things out there. All told, Ford, General Motors and Fiat Chrysler Automobiles will have nine entries in the truck and utility categories.

The winners of the highly-coveted awards, collectively known as NACTOY, are determined by a vote of 60 U.S. and Canadian automotive journalists, this year marking the 25th year trophies have been handed out.

Another sign of how the market has shifted comes from the fact that jurors will consider the merits of only 12 sedans, coupes, hatchbacks, convertibles, sports cars and wagons. By comparison, there will be 20 models competing for the utility vehicle award. Only three classic body-on-frame truck models – including one pickup and two full-sized SUVs – will vie for the truck trophy.

General Motors’ high profile presence reflects the broad array of new trucks it is bringing to market this year, everything from the Chevrolet Equinox to the big Buick Enclave.

FCA has two offerings in the utility vehicle category, including the complete makeover of the Jeep Compass. But the presence of the all-new Alfa Romeo Stelvio underscores how even exotic brands better known for sports cars and sports sedan now find it necessary to add utes to their line-ups.

While the familiar VW badge is absent in the passenger car segment, its Porsche and Audi brands weigh in with two offerings. Audi also has one model, the new Q5, in the ute category, and VW demonstrates its new strategy by introducing two of its own new utility vehicles: the all-new Atlas and the larger remake of the Tiguan.

Of the 35 vehicles included in the three categories, BMW has three models up for consideration, including the 5-Series sedan and X3 utility vehicle. Mini view for ute honors, as well, with the makeover of the Clubman. All told, FCA has three entries for the 2018 NACTOY sweepstakes, as do Honda, Hyundai, Kia and Toyota.

One potentially controversial decision left out the new 2018 Honda Civic Type-R. Though it’s the first time the high-performance Civic has been sold in the U.S., NACTOY rules generally preclude consideration of older models equipped with new powertrains. The latest-generation Civic already took Car of the Year honors.

(Could Tesla bring an upset win in the N.A. Car of the Year category? Click Here for more on the debut of the Model 3.)

Under those guidelines, the Ford Focus RS wasn’t included in the 2017 balloting, and the new Dodge Challenger Demon won’t qualify, either. Nor will you see the new Ford GT on the list, as it is being sold in extremely low volumes – and Ford has decided that it will choose who can purchase one of the new supercars, rather than opening sales up for all consumers.

Ford, Jaguar Land Rover and Subaru each have two vehicles up for awards, while Mazda, Nissan, Tesla and Volvo each.

In the coming months, NACTOY jurors will get busy testing all of the new models eligible for the next series of awards. They’ll make their first cut in September, reducing the list to 10 cars and 10 utilities, as well as the three light truck entries. The finalists will be chosen in December and the winners of the three North American Car, Truck and Utility Vehicle of the Year awards will be presented in January, at the opening ceremonies of the 2018 North American International Auto Show. 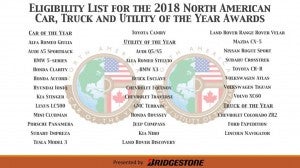