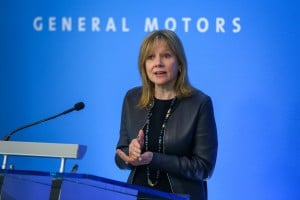 General Motors reported second-quarter net income of $2.4 billion, down about 15% year-over-year, reflecting a variety of headwinds, including weakening U.S. sales, as well as the sale of the maker’s European Opel Vauxhall unit to France’s PSA Group.

On a per-share basis, GM came in at $1.60, though that rose to $1.89 by excluding  one-time charges, well ahead of the $1.68 consensus forecast by automotive analysts polled by FactSet. As a result, the maker’s shares began trading up slightly in early morning trading.

GM’s declining net earnings came as no surprise, especially considering the ongoing slump in U.S. new vehicle demand. It reported an overall 5% decline in June, continuing this year’s overall downward trend. In recent months, the automaker has voluntarily cut back on low-profit fleet sales, but June’s retail numbers were also down 3% for June.

GM has responded to declining sales in ways it had typically avoided during prior downturns, regularly trimming back production to keep supply more in line with demand. Since last November it has dropped shifts at six separate plants, including the big passenger car assembly facility in Lordstown, Ohio. And it has scheduled a number of brief work stoppages, as well. 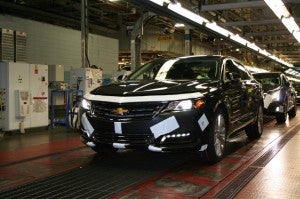 GM has been pressing hard to keep production and demand in line, regularly cutting output of slow-selling models like this Chevy Impala.

(Click Here for more on the weakening U.S. auto market.)

The automaker is now reportedly considering dropping six of its slower-selling passenger car lines, including the Buick LaCrosse, Cadillac XTS and the Chevrolet Impala. It may also abandon the second-generation Chevy Volt plug-in hybrid, despite that model serving as an emblem of its shift to greener powertrain technologies.

“Disciplined and relentless focus on improving our business performance led to a strong quarter and very solid first half of the year,” said GM CEO Mary Barra, in a statement accompanying the earnings report. “We will continue transforming GM to capitalize on growth opportunities and deliver even more value for our shareholders.”

Even with the cutbacks of the first half, GM still ended the second quarter with 105 days of vehicle inventory. The maker had targeted a reduction to 90 days, while the industry norm is considered somewhere in the range of 60 to 65 days.

Chief Financial Officer Chuck Stevens told reporters on Tuesday the goal is cut another 150,000 vehicles out of the production schedule during the second half of 2017, with a goal of getting inventory down to about a 70-day supply. But that depends upon increasing U.S. sales in the second half, a questionable assumption considering demand has been off for the last four months.

(GM looking to cut as many as six slow-selling passenger car lines. Click Here for the full story.) 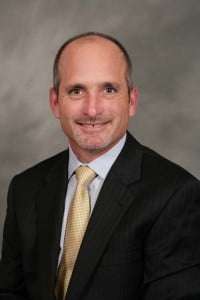 GM CFO Chuck Stevens is expecting things to look better during the second half of '17.

GM would have faced a tough time delivering numbers better than its record $2.87 billion second-quarter profit in 2016, analysts noted. Revenues, meanwhile, dipped 1.1%, to $37.0 billion. That was well below the consensus forecast of $40.1 billion.

The latest quarter took a hard hit from GM’s decision to sell off its long-struggling European operations, Opel Vauxhall last delivering a profit in 1999, despite repeated turnaround efforts. That resulted in a $770 million one-time loss for the May-June quarter. According to CFO Stevens, the sale of the Opel-Vauxhall unit should be completed by the end of this year.

There was also a $655 million restructuring charge related to GM’s decision to stop selling vehicles in India and to sell off its South African operations.

Despite the weak second-quarter numbers, GM officials said they are maintaining their full-year forecast of between $6 and $6.50 a share in earnings for all of 2017. It delivered a record $6.12 per share profit last year.

Ford Motor Co. will report earnings on Wednesday, and the automaker is expected to show a decline of 17%, according to industry analysts, to $0.43 per share. It began the year with a sharp, 35% Q1 tumble.