Nudging 120 into a banked oval. 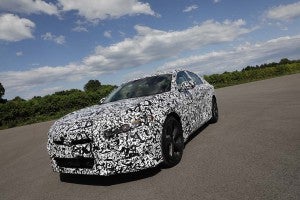 A heavily camouflaged version of the 2018 Honda Accord due in production later this year.

The Shinkansen, Japan’s lightning-fast bullet train, has nothing on us.

As we rocket down the back straight, the heavily camouflaged 2018 Honda Accord quickly hits triple digits and keeps on climbing…110, 120. At that point, it’s time to take our eyes off the instrument cluster as we rise to the upper lane of the steeply banked oval at the Honda Proving Ground in Haga, Japan. As we come out the other side, we’re clocking bullet train speeds.

Those who think of the Honda Accord as a competent, albeit staid, midsize sedan or coupe could be in for a big surprise when the 10th-generation model hits showrooms later this year. All the more surprising, the added performance comes at the same time that Honda abandons the V-6 option long offered on the Accord line.

(Late to the game, maybe, but Honda has big plans for autonomous vehicles. Click Here for this inside report.)

Lament not. In its stead, the Japanese automaker has transplanted the fast-beating heart of the latest Honda Civic Type-R, the sizzling, turbo-four-powered hot hatch that is making its first appearance in the U.S. market for 2018. The 2.0-liter engine makes a screaming 316 horsepower in European and Asian trim, 306 in the American model. 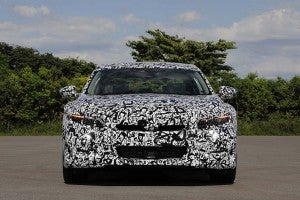 Under the hood of the new Accord, Honda will offer three different powertrains for 2018.

Slipped under the hood of the next-gen Accord, the turbocharged powertrain “will have less” power than in the Type-R, cautioned Accord Chief Engineer Junji Yamano, after we climb out of the prototype. How much less, nobody at Honda is talking but, based upon our preliminary experience – and a few careful hints – we are expecting better numbers than the current Accord V-6’s 278 hp.

It also will help that the 2018 Accord’s turbo package will include an all-new 10-speed automatic that has been wonderfully tuned to maximize low-end torque while also boosting fuel economy when you’re not mashing the throttle. Again, precise EPA numbers won’t be released until closer to the new Accord’s launch, but we’re confident of something measurably better than the 2018 V-6 numbers at 21 City and 33 Highway.

(Oh, and while you need to run on premium fuel to get every last pony out of the Civic Type-R, the 2.0-liter four runs on regular unleaded in the Accord – one reason for the lower output.)

Our drive time was relatively modest at the test track, and we were in a pre-production prototype, but if that heavily camouflaged sedan is any indication of what we can expect, look for silky smooth, virtually transparent shifts, with none of the hunt-and-seek problems that have plagued other advanced gearboxes, notably the ZF nine-speed. 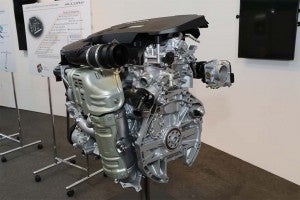 Honda joins a growing list of manufacturers by opting for an all-four-cylinder engine strategy. The new 2.0-liter turbo engine is shown here.

For those who are looking for even better mileage, or want something a little more affordable, Honda will have two other options for 2018 Accord buyers. They’ll have a base 1.5-liter inline-four, the same turbocharged package now found in the CR-V and Civic, here paired with either a CVT or a six-speed stick.

Intriguingly, Honda is bucking current trends, that manual gearbox being offered as an option for the new 2.0-liter package, as well. Whether this hints of a broader revival seems doubtful, but we’re looking forward to seeing what that transmission will be like in the big sedan later this year.

The reality is that the new 10-speed is so good that even performance buyers are likely to question the benefits of the stick. The automatic, incidentally, is essentially the same gearbox found in the all-new Honda Odyssey minivan, here tweaked for pairing with the turbo 2.0-liter engine and fitting inside the Accord.

The third engine alternative will be an updated version of the current Honda Accord Hybrid package. In the outgoing model it makes 212 hp and delivers 49 mpg City, 47 Highway. The basics of the hybrid drivetrain remain unchanged, though Chief Engineer Yamano did say there were “some component changes” that will lower friction and find other ways to improve efficiency. As a result, he added, “You can expect better fuel economy and performance.

In return for getting some drive time in the new Accord we reluctantly agreed to embargo impressions on other aspects of the new sedan model. We’ll just drop a broad hint that it is a handsome vehicle that, much like the latest Civic, marks a big improvement in design. 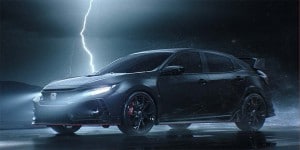 The turbo 2.0-liter engine will be shared with the Civic Type-R but make slightly less power.

And while we can’t talk about Accord ride and handling we can discuss the brief time we spent maneuvering a different Honda “mule” around the Proving Ground’s handling track earlier in the day. That package delivered a much more confident ride, with pleasantly precise steering and only the most modest amount of body roll. Honda officials were tight-lipped when asked what model – or models – will benefit from the new suspension. We’ll wait to see if those updates appear in the 10th-generation Accord.

(Click Here for a test drive of the new Honda Civic Si.)

The arrival of the 2018 Accord will underscore some significant changes in Honda’s broader powertrain strategy. Note that both of the non-hybrid models will now be turbocharged, a performance and mileage-enhancing technology increasingly accepted by automakers facing strict new mileage and emissions mandates even as buyers also demand more performance. “We are late-comers to turbo,” acknowledged Yamano, but upcoming Honda product plans suggest it will make up for that with gusto.

As for hybrids, the third-largest Japanese maker adopted that technology early on, its original little Insight model appearing about the same time as the first Toyota Prius. Honda hasn’t had nearly the success of its bigger rival, but it will, if anything, increase its focus on both conventional hybrids and more advanced plug-ins and pure battery-electric vehicles.

During a meeting with the media at the proving grounds this week, Honda CEO Takahiro Hachigo stressed that the carmaker plans to use some form of electrification in “two-thirds” of the vehicles it sells by 2030. Expect to see Honda put even more emphasis on the hybrid version of the Accord when the new model comes around later this year – though it could prove tough to compete with the 2.0-liter turbo we got to drive.

But the new engine line-up could prove critical for Honda. While the Toyota Camry has long dominated the midsize segment — with an all-new version of that model also about to reach showrooms — Honda has been the leader on the retail side for four years running. Both automakers need strong new product, in reality, considering that the midsize sedan and coupe market has been hard hit by the ongoing switch to SUVs and CUVs. We’ll report on the Camry in the coming weeks and hope to have a full review of the 2018 Honda Accord soon afterwards. But what we saw in Japan was a sign that the 10th-gen model should be a strong contender.