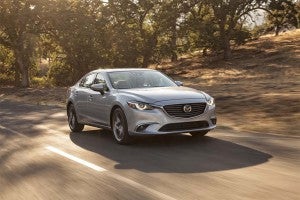 On certain Mazda6 and Mazda3 models, the parking brake may not fully release or, conversely, it may fail to keep the car in position, increasing the risk of a crash, the company notes.

According to Mazda, water can get into the brake caliper, causing a shaft to corrode and bind. When that occurs, the parking brake may stick. It can do it in the on positions or not engage fully, which may allow a car to roll if it is parked on a slope.

The problem affects only cars with a hand-operated parking brake lever system, according to documents from the U.S. National Highway Traffic Safety Administration.

To resolve the problem, dealers will check the rear brakes to see if the shafts are corroded. If they are, the dealer will replace the calipers. If not, they’ll replace a boot that is designed to keep water out of the compartment.

(Click Here to more about Mazda’s plan to bring back the rotary engine.)

The Japanese automaker saw the problem first turn up in April 2015 in Canada. However, at that point they elected to take a wait-and-see approach to the issue because it hadn’t been reported elsewhere.

Within two years of the initial complaint, Mazda had 13 reports in the U.S. of the problem happening on both models.

Additional problems, including a rollaway incident, were reported in Germany and the United Kingdom. The current action encompasses vehicles in the U.S., Canada, Puerto Rico, Guam and Saipan.