Baby, Kia Has a Turbocharged Soul 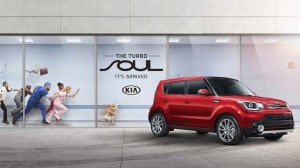 They’re back. The Kia hamsters have returned in the latest in an ongoing series of promotions for the Kia Soul. And they’ve got a new baby to help celebrate Kia’s new baby: the long-awaited Soul Turbo.

The track-suited rodents probably should have taken the advice of W.C. Fields, who said one should never work with children. In this case, it’s a brand new baby who escapes the maternity ward to check out the new car – all to the sounds of Motorhead’s “Ace of Spades.”

As to the 2018 Kia Soul, it’s the higher-performance model everyone seems to have been asking for since the first version of the ungainly yet appealing crossover first appeared in 2009. It punches out a reasonable, if not exactly tire-squealing 201-horsepower from its turbo four, with buyers offered either a manual or automatic transmission.

The turbo model has been dubbed the Kia Soul Exclaim, and it becomes the third version of the automaker’s iconic box-car, along with both the naturally aspirated version and the Kia Soul EV.

“The Kia Soul has never had any trouble standing out from the crowd,” says Saad Chehab, the brand’s vice president of marketing communications. “Turbocharging gives consumers a new and more powerful way to experience one of Kia’s most popular vehicles, and we are announcing its arrival by infusing Kia’s iconic hamster campaign with newfound speed and aggressive style.” 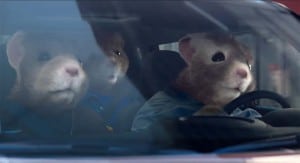 Proud parents? The hamsters have two reasons to celebrate in their new ad campaign.

The new Soul Exclaim starts at $16,100, not including delivery fees. Options include the six-speed automatic gearbox.

Kia isn’t saying much more about the new turbo model, including fuel economy numbers before its sales launch.

As for the new hamster ad, “Baby Turbo” almost immediately escapes his bassinet, racing through the hospital wearing only a diaper. Agency David & Goliath created a whirlwind adventure for the new member of the clan who races through MRI scanners, sends hospital gear flying and creates overall chaos as he races to check out the new Soul Exclaim.

The spot was created primarily for use in movie theaters, though it is also available for viewing online as of today.

Kia can use a little turbo boost. After years of solid growth, sales have tapered off in recent months – and more rapidly than the U.S. new car market overall. While the launch of a new Soul – backed by the ever-popular Kia Hamsters – will draw some attention to the brand, the Korean carmaker is more likely to get a bump in sales with the launch of the all-new Stonic SUV in 2018.

(Why can’t most Americans afford a new car anymore? Click Here for the story.)