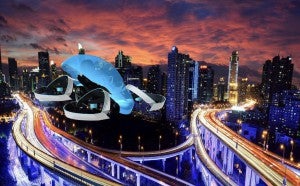 Toyota has put up $353,000 to help fund the Cartivator, a flying car concept being developed by a group of employees.

Toyota Motor is putting up $353,000 to help a group of young employees to develop a flying car.

The project, led by a group called Cartivator, started in 2012 when project leader Tsubasa Nakamura and some employees began volunteering their time for the project. The group now has more than 30 members.

Drone technology is being used to power the three-wheeled prototypes, which measure just nine-and-a-half feet by four feet, and have a projected top speed of 62 mph, according to the Nikkei Asian Review.

Toyota also is not the only one backing the group. Cartivator has also received support from Masafumi Miwa, a drone expert and associate professor of mechanical engineering at Tokushima University and Taizo Son, founder of GungHo Online Entertainment, a Japanese online video game developer.

(Has the era of the flying car finally arrived? Click Here for the latest.)

Up until now, Cartivator has used primarily used crowdfunding to finance the project to which Toyota agreed to commit more than $350,000.

The group expects to have a prototype ready for a manned test flight is expected by the end of 2018, with a target to commercialize a flying car in 2020, to fall in conjunction with the Olympics being hosted in Tokyo, the Nikkei Asian Review reported.

With traffic jams becoming more prevalent around the world, flying cars have gotten attention from not only Toyota, but also company’s such as Airbus and Uber as well as a start-up company in which Google co-founder Larry Page, has become a significant investor.

Other flying car companies are also looking for customers among the super rich.

At the Top Marques supercar show in Monaco in April, the “Flying Car,” which was developed by a Slovakian company, AeroMobil, was on display.

(To see more about the evolution of flying cars, Click Here.)

AeroMobil said that its vehicle is able to change from automotive to an aeronautical mode in less than three minutes and can travel either 700km or 435 miles on the road or 750km in the air at 75% of its top speed.