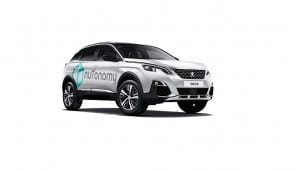 PSA Group is partnering with nuTonomy to develop autonomous vehicles. They will test the Peugeot 3008 in Singapore.

The French automaker PSA Group and nuTonomy of Boston, Massachusetts, a developer of software for self-driving cars, have formed a strategic partnership for testing autonomous vehicles on roads in Singapore.

During the initial phase of the partnership, nuTonomy will install its software, along with specialized sensors and computing platforms, into Peugeot 3008 vehicles that have been customized by PSA’s innovation teams.

Anne Laliron, head of the Business Lab, PSA Group, said, “This collaboration is a significant step towards fully autonomous vehicles, which will enable us to offer different mobility solutions to our customers. We are excited to work together with nuTonomy’s team of software and robotics experts to make the concept of self-driving PSA cars more and more concrete.”

Boston-based nuTonomy expects to complete the integration of its autonomous vehicle system this summer, with on-road testing of the self-driving 3008, beginning in Singapore in September. The 3008 was recently named European “Car of the Year.”

Karl lagnemma, CEO and co-founder of nuTonomy, said, “We’re confident that working with (PSA Group) will bring us closer to our goal of deploying a safe, efficient, fully autonomous mobility-on-demand transportation service for urban driving environments. We look forward to future collaboration opportunities with PSA.”

The PSA-nuTonomy partnership provides an opportunity for both companies to study autonomous vehicle system performance, as well as the end-to-end user experience of an on-demand AV mobility service in urban use case, the two companies said in a statement. 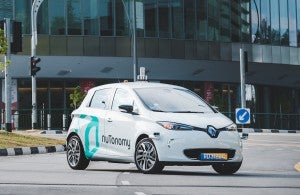 Similar joint ventures, notably GM and Lyft and Waymo and Fiat Chrysler Automobiles are becoming more common in the auto industry as carmakers and tech companies race to participate in the race to build fully autonomous vehicles which have the potential to transform the transportation landscape in the U.S. and in major cities around the world.

Seamless integration of AV software with vehicle hardware is viewed by PSA and nuTonomy as a critical step toward deploying driverless cars at scale, over extended life cycles, officials from both companies said.

The collaboration also bolsters PSA Group’s ambition of becoming the preferred mobility provider for customers worldwide, as described in the company’s strategic plan “Push to Pass” issued in April 2016. This collaboration, which is being implemented under the PSA Group’s “Autonomous Vehicle for All” (AVA) program, will bring to market on-demand mobility solutions offering full autonomy.

Following the initial phase of this partnership, the companies will consider expanding their on-road AV testing initiative to other major cities around the world. PSA Group’s Business Lab and Innovation Division are launching this collaboration to identify and evaluate new business opportunities, particularly in the Mobility and Digital fields.

Singapore actively supports the development of new mobility solutions, as it seeks to embrace a growing population while maximizing the efficient use of infrastructure and nuTonomy’s founders and the LTA have been partners in the development of commercial AV services since 2010.